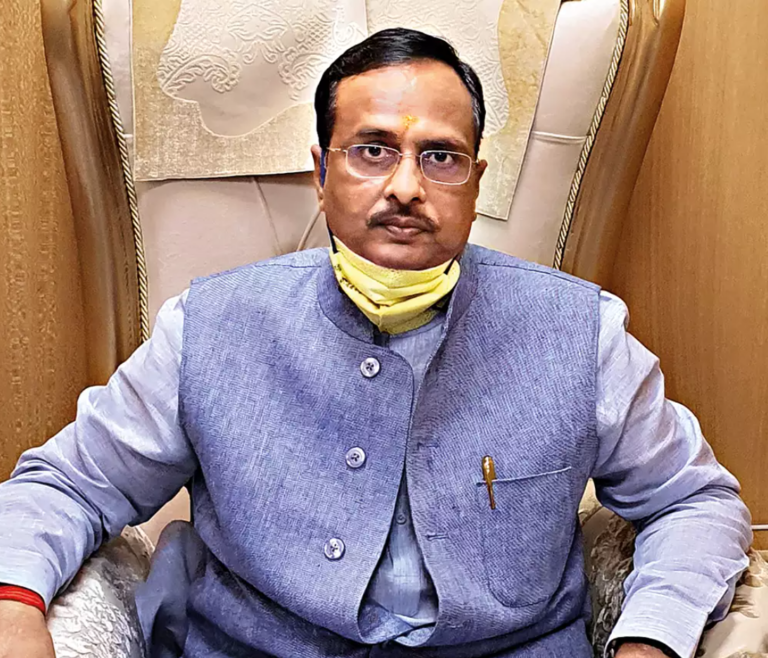 What is your biggest economic challenge now?

Coronavirus has created unfortunate circumstances. Filling up the losses that have happened is definitely a challenge but I am positive and hopeful. Our CM has played a visionary role and prepared an economic plan. We have made changes in our industrial policy, IT and electronics policy and in the new startups policy. In electronics sector, for those upset with China and wanting to shift base, we have made changes because we want them to come straight to India instead of Vietnam or elsewhere. For this, earlier we didn’t allow old machines here. Now, we changed the policy so up to 40% of old machinery can be brought here. This has led to a big shift. China has already said the UP chief minister is a challenge for them. A large number of companies from China are moving to India. If 100 mobiles are being made in India, 60 are being made in UP. We are making an electronics city.

How are you dealing with the migrant crisis?

We are doing skill mapping of migrants. For those migrants coming from other states, first we do screening, then sanitisation and then take them to their destinations. When they reach their district, we do a skill assessment. This is listed and then they are connected to employment exchange at the district level. They are given insurance and Rs 1,000 for food. They are given 25 kg wheat and 5 kg of daal. If they don’t have a ration card, it is made. 14,75,000 of 33 lakh migrants who returned to UP have already been mapped for their skills so far. The core reason for this is that we want migrants to work in UP.

But how will you revive business?

We have focussed on a policy of one district-one product. It has created many opportunities for small scale industries. We have made many relaxations in real estate sector, which will directly benefit employees. We have announced a Rs 20,000 crore package for Covid-19, which includes special loans for MSMEs. What we are giving for cart pullers, upto Rs 10,000, no other state is doing that.

Your CM said that other states will have to take permission to employ migrants from UP. Please explain.

He did not say anything like that in his statement. He said that a time will come when others will call back people from our state. UP has got back 33 lakh workers in 1,250 trains and 27,000 buses.

You have had disputes with Congress-ruled states like Rajasthan on migrants. Are they resolved?

We had no issue with Rajasthan. For a political stunt a political party said they will send buses. The buses they sent were from Rajasthan State Transport Corporation. Ten days before that when students were brought from Kota, the state government asked us to put in writing that we would pay for tickets and fuel. This was for buses from Kota. When we got back 1,200 students stranded in Kota, we ran short of 98 buses. That time, the MD of Rajasthan transport told his UP counterpart on phone that they would provide if we pay rent for the buses.

Why didn’t you accept Priyanka Gandhi’s offer to send buses?

Of the less than 1,000 buses they listed, 460 were not useful. Did they expect that we could use these buses to bring our migrants back safely? We couldn’t take such a risk. That too from those who charged us for their buses earlier. We were already running 2,700 buses on our own and doing the bulk of the work on bringing migrants back.

What are the rules for places of worship that have opened?

For temples, there will be no bell ringing or exchange of prasad. Music can be there but no kirtans or bhajans. People cannot touch the gods’ statues, constant warning and advisories should be broadcast on loudspeakers, and people will have to leave their slippers in their car. For Muslims, do ‘wuzu’ [hand washing] from home, don’t hug and don’t shake hands. Similarly, in gurdwaras, be careful in langars, do proper sanitisation.

How prepared are you in medical terms as cases spike?’

UP’s corona death rate is very low and recovery rate is high. We are testing in 30 places. We currently do 10,000 tests a day. By June 15, this will be 15,000 a day and by June 20, it will be 20,000 a day. We have 1 lakh beds ready in Level 1 (with oxygen), Level 2 (with oxygen and ventilator), Level 3 (oxygen, ventilator and ICU facilities). We are hopeful. People were saying Agra was out of control but now the recovery rate in Agra is 87.2 of every 100 patients. Our red zones in Noida, Kanpur and Lucknow are decreasing.