The abstractions of poetry and the hustle bustle of contemporary politics seldom go together. Indian political elites, particularly in the early period, however, have had a long tradition of respect for the literary form. Ramachandra Guha once documented a beautiful encounter between Nehru and the legendary poet, Suryakant Nirala. Soon after a visit to China, Nehru, addressing a public meeting in Allahabad told the crowd about the story of a Chinese king who had two sons: “one was wise, the other stupid”. When the boys reached adulthood, the king gave his throne to the stupid one, saying “he was fit only to be a ruler”. But the wise one…was destined for greater things – he would be a poet.” Nirala was sitting in the audience, and with these words, Nehru flung off the garlands around his neck and threw them at Nirala’s feet. It’s a story that exemplifies the healthy interface between the early nationalist elites and practitioners of literary art forms. Partly, this was because Indian early Indian politicians themselves were highly erudite and literary figures themselves in various ways. Cutting across the political spectrum, Indian politics, right up to the middle of the twentieth century was peopled with an extraordinary class of leaders who were extremely skilled in the use of the written word, whatever the form.

This tradition of writing has sadly been going into oblivion in recent decades, with the rise of a new kind of politics focused more on the pure accumulation of power, than on the basis of grand ideas. The rise of newer social groups has undoubtedly greatly enriched Indian democracy but there is increasingly a growing chasm between high politics and electoral arithmetic. This is why Kapil Sibal’s collection of poetry is a welcome whiff of fresh air. Because it connects with a tradition of thought and public reflection that Indian politics seems to have lost. In recent years, only Vajpayee, among high profile national leaders, has publicly engaged in the poetic form while still in power. V.P. Singh did so long after his prime ministerial years and during his long illness; so did Chandra Shekhar and I.K. Gujral. Even Deve Gowda has believed to have indulged in some Kannada writing. But only Vajpayee used his poetry as a tool in his armoury to fight his battles. A distinction needs to be made here between the revolutionary poetry of the kind espoused by the Leftist activist Gaddar who has used the form as a tool for mass mobilization. This is a distinctly genre from the Vajpayee model where poetry became refuge for his soul, a mechanism to fill in the blanks in his public posturing.

Sibal’s poetry is altogether of a different kind. Only once did he use his poetry in his politics, ironically to question Vajpayee in a Rajya Sabha debate on Ayodhya. Reproduced in the book, the poem pleads with the ‘The Man Behind the Mask’, to “please come clean” and demonstrate that he was “still a democrat.” The rest of his poems, offer a fascinating glimpse into the thought processes and sensitivity of a man who has been the Congress’ legal eagle for years, its erudite face on television debates and now a successful government minister. Behind the harsh glare of the media spotlight, is an individual who has coped with tremendous loss in the form of his first wife, and one who constantly questions the inequalities and issues that he confronts daily. The personal poetry – touching upon his personal loss, the joys of parenthood, the finding of love – is tender and sensitive, particularly in an age where the politician has come to be seen only with a certain cynicism. Sibal’s youthful humour shines through in pieces like ‘The Lover and the Chowkidar’ with its theme of new-found teenage love.

The most revealing though is Sibal’s take on his own legal and political trajectory. Sibal is very conscious of his background as a member of the Delhi elite and he constantly questions the certainties and actions that must define his professional life. There is entire section that reveals his cynical take on the daily cut and thrust of politics – poems like ‘Shameless’, ‘Politician’s Eightfold
Path’, Refraction’, ‘Political Opportunism’ and ‘Sycophant’. The last contains Sibal’s barely disguised take on the feudal Indian tradition of following the Great Leader:

When he walks, I follow suit and as he changes direction I suitably choreograph my way almost to perfection….

Not wasting time, I tell him of the speech he made, of gestures, carefully crafted words, and maturity displayed…

The leader smiled, my day was made. I half lay on the ground, supinely moved a few steps back, and weaved my way around.’

There is another one which must reflect his recent experience as minister. In ‘Smooth Sailing’, Sibal echoes Arun Shourie’s thesis on the eternal movement of the government file, pointing a finger at bureaucratic stasis:

‘At the time of implementation, all essential parameters change: Bureaucrats then advise the minister to start all over again.’

This is man who while being engaged in the daily culture of politics, constantly reflects on the state of the polity and finds an outlet in poetry. In ‘Uncommon Bedfellows’ he reflects on the parallels between journalism and legal profession calling them both “parasitic phenomena.”

‘One investigates to satiate the thirst of readers, hungry for a newsworthy report. The other spins out a story for delivery of justice in court…

Feeding in enervated targets with intent to defend (often the indefensible).
These pretenders of the faith are frequently undependable.’

Sibal is no Nirala, but his forays into poetry, often while on a flight and on the cell phone’s keyboard, often hold up a sensitive mirror to the contemporary polity. Indian politics needs more of self-reflection of this kind. 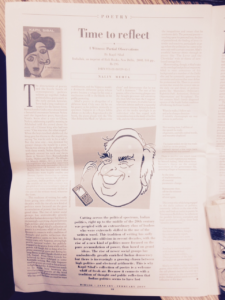