Dynasty is not enough 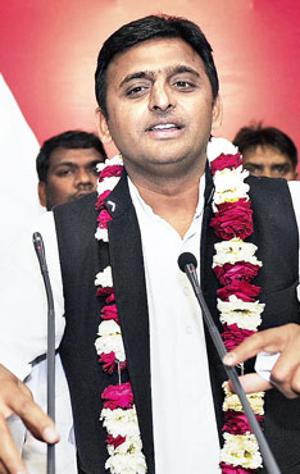 When Jahangir was crowned as Mughal emperor in 1605, his first act was to cut down to size his uncle and his father’s closest confidante, Raja Man Singh, who was packed off from court to take over the governorship of Bengal.

Changing policies, as the SP did for this election, requires guts and thought. Changing political cultures and the way people work instinctively is a much more difficult thing. Look no further than the violence linked with the triumphant SP supporters since election-day, from Jhansi to Parvatipura. That is why the unfolding saga on Lucknow’s Vikramaditya Marg is such a fascinating battle to watch.
It has all the elements of a classic generational-change potboiler: the ageing patriarch, the fierce coterie around him who knows only one way of doing business, the foreign-educated son with now just new-fangled ideas but the wind beneath his sails and his own new coterie, and the future of an entire state in the balance.

Judging purely from the public rhetoric from Akhilesh Yadav, this is not just a dynastic shift happening in Lucknow, but a cultural shift, one that will have important lessons for dynastic sons and daughters across the political spectrum. Learning the lessons from the bitter taste of defeat just three years ago when his wife lost the Lok Sabha seat in Firozabad that he had vacated, Akhilesh shifted gears. He has taken his father’s existing network, superimposed some of his own new ideas on the most moribund kind of Lohia-ism that passed for ideology in the Samajwadi Party, brought in his own people and talked the big talk on change.

That convinced voters; now he will have to convince his own supporters that this is for real, even as he watches his back amid byzantine intrigues and a disgruntled old guard that might just have seen the rhetoric of change as simply that, just a tool to come back to power.

Dynastic Indian politics may be but trading successfully on the family name has always required a premium on sharp political sense, ruthlessness and solid ground intelligence. Even in the mother of all dynasties, the Congress, Indira Gandhi junked the Syndicate and completely re-shaped the party’s way of doing business into her own image when she took over; similarly, Rajiv Gandhi was to talk bravely of ridding the party of powerbrokers and vested interests in the first flush of his victory in 1984 but ending up succumbing to the same forces. Breaking with the past is a slogan used by every fresh flag bearer in politics, including those who talk of breaking with their own family’s past, but it is rare to find a real game-changer who actually ends up walking the talk.

One example, from outside our shores is the younger George Bush whose brand of testosterone-fuelled and Christian-infused Americanism was so radically different from his own father’s legacy as President that the elder Bush made his discomfort with his son’s policies, especially on the invasion of Iraq, public. In that case, the younger Bush’s policies were a bizarre perversion, not an improvement, but the broad logic of success was the same: his family name was a great head-start but his political success was his driven by his own reinvention and not the repetition of an old template.

Conversely, Rahul Gandhi’s utter humiliation now is a result of the arrogance and intellectual laziness that led to his following an older ‘hawaii neta’ model of the political leader where one could simply wave their hands in a royal wave as they got off a helicopter, mouth a few platitudes and get captive vote banks to vote. That time is long gone. The Congress just hasn’t caught up to it. Glamour, gimmickry, and family name can get you crowds; even genuine good-will if you come across as sincere, but not votes. This is the lesson that the Congress still has to learn even as the younger start-up political parties are shifting shape and adapting much more quickly to the writing on the wall.