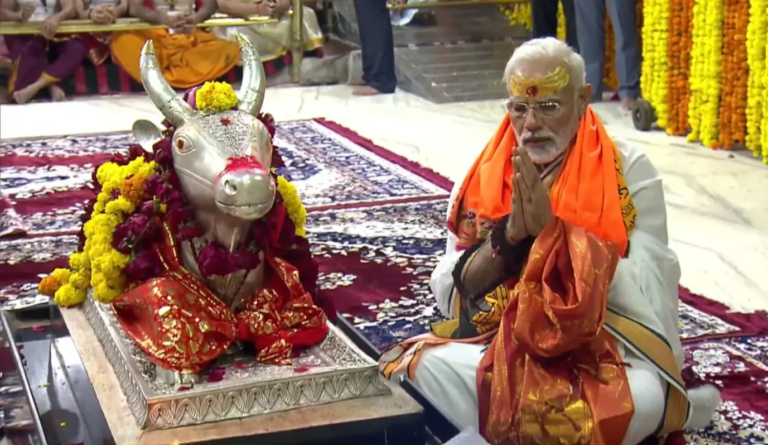 It would be mistaken to see the corridor project at the Mahakaleshwar temple in isolation. It is part of a concerted strategy that combines religiosity, cultural identity and Hindu-ness with a new unapologetic cultural nationalism deeply rooted in Hindu cultural symbols

His forehead painted yellow with the mark of Shiva — sandalwood, bhasm (ash), turmeric and vermillion — a saffron scarf over his shoulders and a Rudraksha mala (another symbol associated with Shiva), Prime Minister Narendra Modi presided over yet another major temple renovation in the ancient city of Ujjain last week.

Chanting the Saivite devotional cries of ‘Har Har Mahadev’ and ‘Jai Sri Mahakal’ before a crowd of devotees, the prime minister framed the inauguration of the Mahakal Lok corridor at Ujjain’s Mahakaleshwar temple, which houses one of India’s 12 jyotirlinga sites (considered a manifestation of Shiva), in epochal terms. “This development of our jyotirlings,” said Modi, “is the development of the spiritual flame of India. It is the development of India’s knowledge and its darshan.” This “cultural darshan” of India, he emphasised, “is once again reaching the peak and getting ready to guide the world”.

It would be a mistake to see the corridor project at the Mahakaleshwar temple in what was once the ancient Hindu kingdom of Avantika in isolation. It is part of a concerted strategy that combines religiosity, cultural identity and Hindu-ness with a new unapologetic cultural nationalism that is deeply rooted in Hindu cultural symbols. This cultural play reaches out to many religious Hindus beyond the BJP’s core group of Hindutva supporters.

Many liberals make the mistake of dismissing the carefully choreographed symbolism of Modi presiding over the refurbishment of ancient religious sites, such as the Kashi Vishwanath temple in Varanasi last year, as mere political optics aimed at short-term electoral mobilisation. They could not be more wrong.

In fact, the cultural power play and Modi’s focus on refurbishing temples are deeply intertwined with the idea of ‘New India’ itself that the PM heralds as a radical break with the past. Beyond symbolism and the reordering of ritual economies and cultures, it carries within it a much deeper remaking of the political economy as well, with an underlying economic design focused on a new kind of Indian consumer and citizen.

There are five key features that characterise this shift:

The Modi-Nehru contrast: Modi’s fronting of many of these temple projects — such as the Kashi Vishwanath corridor which he inaugurated in 2021 and the radical symbolism of the PM presiding over the Bhoomi-pujan of the Ramjanmabhoomi in Ayodhya in August 2020 — can be directly contrasted with Nehru’s firm opposition to the state playing any role in reconstructing the Somnath temple in 1951.

Architectural Reordering, ‘New India’ and Legacy: The temple projects, the reordering of the ritual economy and the explicit focus on cultural markers in this shift segue seamlessly into PM Modi’s other signature projects that reorder the visual geography of the nation. The new Central Vista in Delhi and the new Parliament building which is currently being constructed are all physical manifestations of the larger reordering of the nation that PM Modi heralds with his idea of ‘New India’.

This shift in India’s visual geography, in that sense, is long-term, systemic and intrinsically linked to an alternative conceptual idea of the nation that is fundamentally different from Nehru’s.

This article was first published on Firstpost |  October 16, 2022