BJP and the soldier 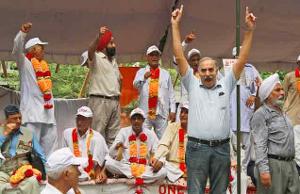 The Prime Minister’s second Independence Day speech from the Red Fort was received differently in different quarters but there is one political constituency where it got a clear thumbs down. A day after shocking images emerged of police action on protesting ex-soldiers agitating for one-rank-one-pension (OROP) at Jantar Mantar in the Capital, defence veterans reacted emotionally to Narendra Modi’s admission that he had so far not been able to fulfil their demand. “No government has been able to fulfil it in the past,” Modi argued, while reiterating that he remained totally committed “in principle”, was hopeful of a just solution and “discussions are still going on”.

Senior veterans, many with tears in their eyes, crowded TV cameras at Jantar Mantar soon after the speech. As one ex-soldier said: “Why didn’t we get a time frame? Give us an implementation-deadline and we will call off the agitation immediately. We reject this assurance completely.”

At a time when the demand for OROP has become a test case and metaphor for the soldier’s place in modern India, the police action has further increased the distrust between the veterans and the government. Former Army chief VP Malik, who was earlier specially brought in to mediate in the OROP case but gave up in despair, told a TV channel that it “has complicated matters”.

For the BJP, this issue is a political hot potato. First, at stake is the PM’s personal credibility. Soon after being anointed the BJP’s prime ministerial candidate, Modi told an ex-servicemen rally that OROP would have been implemented if the Vajpayee government had been voted back to power in 2004. The PM also told troops in Siachen last October, “it was in my destiny that it (OROP) has been fulfilled.” Finance minister Arun Jaitely even allocated Rs 1,000 crore for OROP in his 2014-15 budget. Yet, 15 months after taking office, the promise remains just that.

The trust deficit is increasing. As defence analyst Brigadier (retd) V Mahalingam argues: “There is a possibility that OROP may be pushed to the 7th Planning Commission. We will not accept this.”

BJP spokesperson Aman Sinha has publicly argued that the government remains totally committed but is taking time because it is “putting in place a statutory framework for OROP”. Veterans point out that there is no need for one because the scheme has already been approved. All that is required is allocation of money from the Rs 2,27,000 crore annual defence budget.

Second, for the BJP which has always prided itself on its emphasis on national security – it has drawn notable party recruits from the top echelons of the armed forces since the 1990s – being targeted by defence veterans is embarrassing. Earlier this week, during a TV debate on OROP, BJP spokesperson Sambit Patra attempted to calm tempers by telling former navy chief Admiral Arun Prakash that he was “only a party spokesperson” and “younger than his son”. Admiral Prakash’s response was laconic: “I request Mr Sambit Patra not to appear on television till a decision is taken on OROP. Full stop.”

Third, four former service chiefs have written to the President of India arguing that the “dismal spectacle” of veterans being driven to agitation “has the potential for inflicting long-term damage to India’s proud and apolitical military ethos”. Today’s soldiers are tomorrow’s veterans and many serving officers are already donating to the agitation. The ex-chiefs point out that “recent developments have not only triggered a process of politicization of the Indian military, but also served to inflict grave damage on its morale and self-esteem”.

There are 12 lakh veteran families in India and several ex-servicemen groups have announced that if OROP is not implemented they would campaign in the Bihar election. Even as Congress vice president Rahul Gandhi was booed by protesting veterans on Friday, several appeared on TV to ask why ex-army officers in the government like Gen VK Singh and Col Rajyavardhan Rathore had not resigned. The anger is fast taking a political edge.

At the heart of the debate is the question of how the government interprets OROP. As finance minister Arun Jaitely has argued, the problem is that “only the arithmetical translation of the principle because several interpretations are being given which are being worked out”. Veterans insist there is only one interpretation: OROP should be given at 2014 salary rates. As Brig Mahalingam says: “We want OROP in full. Nothing less and nothing else.”