Decoding Yogi Adityanath’s welfare model: How Hindutva and vikas recreated BJP as ‘party of the poor’ 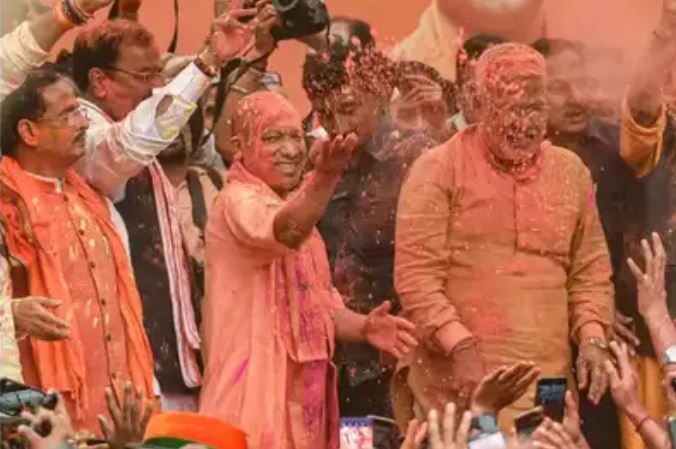 Yogi Adityanath’s return to power in Lucknow has reset the old rules of Indian politics. There are several firsts in the re-election of the Yogi, the saffron-clad Mahant of the Gorakhnath Peeth, as the chief minister of India’s most politically significant state. One, he is the first sitting chief minister of UP to be returned to power since independence.
In the days of Congress dominance, the party won successive state elections but always with a different chief minister. Second, the last time an incumbent party returned to power in UP was almost four decades ago. Third, the BJP actually increased its vote share from 2017, despite five years of incumbency. Its vote-share is the highest ever for any party in UP since 1957.

How did the BJP do it?

Recreating itself as a ‘party of the poor’ was crucial to this victory. When Yogi Adityanath took charge as chief minister in 2017, he made effective execution of all Union schemes his top priority. Modi called this ‘double-engine ki sarkar ‘ in his campaign publicity.

But what this did mean in practise?
The chief minister, a saffron-clad monk, was initially not taken seriously by the UP bureaucracy. At the very outset, he modelled his management style on Modi. ‘When he started as CM, Modi suggested to him that you take a presentation from each department on work they have done and what they will do in next 100 days,’ says a senior official in the CMO.

Yogi put in place a structured three-monthly review system of government programmes. As the officer explained: “When he [Yogi Adityanath] started, he would take meetings till 1 a.m. in the morning. That gave him an idea of what is happening initially. Officers took him lightly. They thought he is a Yogi, they thought they knew him and that he would forget. But his memory is very strong, he remembers figures-for example, he will listen to a presentation and say this is Rs 600 crore, it is not Rs 630 crore. After that, he started doing reviews every three months. He would call them for a review and some officers would repeat old statistics. He would say, you showed the same figures last time, the data is old. Then they would say, ‘Oh, Sir, some work was left’. He told them to come again next month. The thing is that you cannot repeat a lie again and again. You will have to deliver, come what may. IAS/IPS officers are smart anyway. They understood that they won’t be able to manage without doing work and he will keep following up. He doesn’t give any option.

When he is out of town, it’s like a Sunday. If a person works like this, if you do 30 per cent of that, you will see results. Even if you are the most corrupt of corrupt persons, you will still have to show results.’
This focus on delivery of government schemes exemplified the social-welfare focus of the BJP. For example, within 100 days of coming to power, Yogi Adityanath’s government issued the first public report card of its work on welfare schemes. Unlike detailed government reports, this was aimed at the general public, filled with colourful pages and photographs, enumerating results across a number of schemes, from those addressing sugarcane farmers to village electricity to water for fields.

The UP government has since continued to publish similar periodic report cards. Between 2013 and 2019, the BJP swept four elections in UP: two Lok Sabha polls (2014 and 2019), one assembly election (2017), nine by-elections and municipal elections in 2018. Senior state BJP leaders attributed this upswing in political ortunes in great measure to the political mobilisation around welfare.
UP reported the highest number of total DBT fund transfers of all states in 2018-19. Partly this is by virtue of it being India’s most populous state. Even so, it was ahead by a wide margin on DBT in a state-by-state comparison of the highest-spending states.

The pace of construction of household toilets under Swachh Bharat and housing under PMAY-G illustrate the Yogi government’s focus on implementing Union government schemes. UP constructed 17.1 million household toilets between 2014-15 and 2019-20, taking the overall tally to 23.8 million in UP and 164.18 million nationally (see Figure 4.2). Revealingly, Modi began referring to these toilets as ‘Izzat Ghar’ or ‘House of Respect’ after seeing this title-plate on some toilets built in Varanasi in 2017. In a country where a lack of toilets has been one of the most obvious yet underrated of gender divides, this terminology for toilets specifically targeted women.

As Modi told an election rally in UP in 2019, ‘Modi’s campaigning is being done by that daughter in whose house a toilet was built under the Swachh Bharat Mission. For a young daughter, this was the making of an Izzat Ghar.’ The Women Factor: Housing and DBT Modi often says in his election speeches that ‘Modi’s campaign is being done by the poor brother and sister who, under Pradhan Mantri Awas Yojana got a pakka ghar [permanent house], got its keys and went there to stay.’ The PMAY-G was formally launched on 20 November 2016. By November 2020, a whopping 17.5 million houses had been sanctioned under this
scheme for the poor. Over 12 million of these approved houses had already been constructed and over 1.6 million (1.4 million completed) were in UP. Just as with household toilets, these houses are not constructed by the state but funded by it.
Beneficiaries (those who lived in kaccha/dilapidated houses) received DBT of Rs 1,20,000 to build their own houses and were also entitled to receiving ninety days of unskilled labour under MGNREGS in a scheme that was funded in a 60:40 ratio by the Union and state governments.
Importantly, governmental policies ensured a good balance of minority groups and disadvantaged castes among the beneficiaries. Government data shows that 23.08 per cent of houses were sanctioned for STs, 21.7 per cent for SCs and 12.03 per cent for religious minorities during this period nationwide. In UP, over one-third of houses went to SCs and 11 per cent to minorities.

The BJP did not just focus on DBT schemes; it added an extra layer of political mobilisation using grassroots booth-level organisation structures. Crucially, most of the outreach to labharthees happened outside of election cycles. In effect, the party sangathan became the foundation for a new kind of system. This mobilisation around welfare was new. ‘We always had a sangathan,’ says Dinesh Sharma, deputy chief minister. ‘Now we added some new points to it.

BJP leaders are right to argue that they are not winning on Hindutva alone. As one official told me, ‘Many others came before with Hindutva. There was Swami Chinmayanand and others earlier. What happened to them? If it was only Hindutva, Yogi Adityanath would also have got wiped out.’ This is why, they told us, Hindutva is the ‘gati’, it was welfare that was the wheel. In this view, the BJP took major steps that transformed it into what the BJP’s second deputy chief minister KP Maurya called the ‘party of the poor’. As UP Deputy Chief Minister Dinesh Sharma put it, ‘Congress used to have a slogan, “Garibi Hatao” [Remove
Poverty]. Garibi did not go, the garib [poor] would go. Modiji gave a slogan to remove poverty and we have made visible progress, with poverty numbers going down.’

Share. Facebook Twitter Pinterest LinkedIn Tumblr Email
Previous ArticleThere is no question that we need a recalibration of our defense capability.
Next Article What’s Behind The Rise of ‘The New BJP’? Nalin Mehta’s ‘NARAD’ Provides Significant Clue