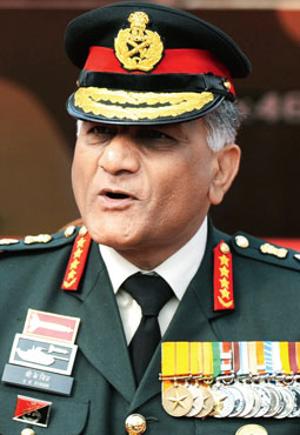 Honour is a funny word, an abstract concept that can mean anything based on the context. Old soldiers will tell you that when it really comes down to it, they fight and die more for the honour of their regiment or unit than for other highfalutin ideals such as mere patriotism. Other men also kill their daughters or wives in the name of honour. When the writer Samuel Johnson put together his defining Dictionary of the English Language in 1755, he knew the ambiguities of honour, writing that it derived from such virtues as ‘nobility of soul’, magnanimity and personal integrity but equally that there was another kind of honour, linked to feudal privileges of rank or birth. This is the sort of honour that is not so much a function of moral excellence but simply a brutish consequence of power.

The Army Chief says that he has taken the unprecedented step of taking the government to court over his birth date because it is a question of his integrity and honour. It is now up to the apex court to decide whether the head of the world’s second largest standing Army was actually born on 10 May 1950 or 10 May 1951. It could have been yet another hilarious episode of Yes Minister, the British series that satirised the special chicanery of bureaucrats, except that the farcical picture of generals in regal uniform squabbling over their birth dates has such deadly consequences that the joke really is on us.

Three things stand out in this sordid saga. First, irrespective of which side you agree with, the fact is that an Indian Army general has served for over 40 years in uniform in what must be the most bureaucratised system in the world, yet there remains a cloud over an elementary biographical date like a birthdate. The dispute has been in the public eye for over a year now but it defies belief that it was not sorted out at the very outset of the General’s career. Even if an erroneous birth date was recorded, government rules are clear: requests for changing the date of birth can only be made in the first two years after being commissioned as an officer. So, why all this confusion now and who created it? Especially, when the General’s last few promotions, including his current appointment, were based on the birthdate he now challenges.

Second, the dispute has unleashed a vicious war in the media which has laid bare the worst kind of cold-blooded manipulations and manoeuvring by senior officials at the top of the Army’s structure. The picture that emerges is one of a top echelon that for the past few years has resembled more a field of killer sharks, each out to get their own, than a collegial band of brother soldiers who are supposed to fight in cohesion and watch each other’s backs.

This is a story with many twisted sub-plots. If you believe the worst, it is a sad tale of self-interest cloaked in the halo of honour. If you believe the General’s supporters, it is the story of an upright soldier who sullenly put up with the manipulations of ambitious detractors perhaps because he didn’t have a choice but is now determined to set the record straight. Either way, the Army’s image has been seriously dented.

On one side is the Attorney General’s legal opinion against the General, on the other is the opinion of four former Supreme Court chief justices weighing in his favour. The Supreme Court will provide an answer but the real problem is far bigger than the General’s personal future, important as it is. It is one of a cultural rot at the highest levels of the Army and a system that seems to have degenerated into a game of feudal favouritism where personal loyalties count far more than objective merit. Not a day passes without further dark whispers of lines of succession and innuendo about who promoted whom among the last two chiefs, as if we were in a medieval court and not in a meritocratic professional setup.

Third, this sorry saga has once again brought into sharp relief the deeper problem of the service headquarters working in splendid isolation from the Ministry of Defence. Tensions between soldiers and civilian bureaucrats will always exist but India alone among major democracies has such deep structural divisions between its soldierly bureaucracy and the civilian setup. Inadvertently, this crisis has again shone light on the legacy of generations of neglect in the name of civilian control, but without much thought to professional efficiency. The time has come for major reforms such as a Joint Chief of Defence Staff and the kind of bureaucratic integration that expert committees have been recommending for years.

General Singh is right. This is indeed about honour. Going back to Samuel Johnson, the real question is what kind of honour and whose.