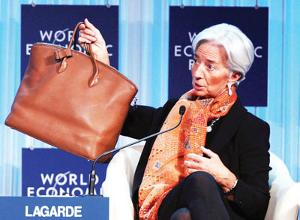 It has not snowed like this in Davos for sixty years. As the world’s business and political royalty descended on the Swiss Alpine ski resort for their annual pilgrimage last week, they could have been forgiven for being lulled into a relaxing turpor by the pristine white blanket and the sheer natural beauty surrounding them. By the end of the week though, the snow was melting here, turning into greyish-brown muddy slush on the pavements of Davos, an apt metaphor for the real mood in the world’s glitterati.

Delegates at the World Economic Forum were not only assailed for the first time by a small contingent of protesters clanging pots and brandishing signs such as “Wir sind die 99%!” (‘We are the 99%); the deep divides at the heart of the global economic crisis were visible everywhere, seeping through virtually every debate like the proverbial elephant in the room.

The Forum’s own annual global risks report set the tone early, putting income inequalities and the resultant political strife engulfing the rich world and the emerging economies as the single biggest global risk for 2012. It was a clear sign of how far the debate has shifted in the past twelve months – if you take Davos as a barometer of elite opinion. Until this year, the issue of inequality never appeared on the Davos risk list at all.

This year it is on top of the chart: the report’s authors evocatively characterising it as the “seeds of dystopia”, arguing that if economic conditions keep on their downward spiral, it could jeorpadise political and social stability drastically, breaking existing social contracts between citizens and governments in many countries and accelerate the downward drift of the global economy, fuelling protectionism, nationalism and populism.

There were few clear answers by the end of the week-long soiree and little to end the nervousness though participants might have left in a slightly better mood than they arrived in. A week of sharing woes, comparing notes and trudging the same snowed pavements in such surroundings does that to you. What is clear is that the old Davos consensus on promoting pure old-fashioned globalisation has long been on the sick bed, in the face of more searching social questions that were previously ignored.

So whether it is the IMF Chief Christine Lagarde grandly announcing that she had come with her little handbag to collect a little bit of money (for the Eurozone) or the JP Morgan chief executive Jamie Dimon declaring that “short term profit means nada” (the same Jamie Dimon who created headlines last year saying that he was sick of the criticism of bankers), the old certainties are gone and the ground is shifting beneath our feet.

It could not be otherwise after four years of crisis and at a time when the International Labour Organisation is predicting that there would be little relief before 2016, joining dire warnings by both the IMF and the World Bank. The ILO estimates that global unemployment now stands at 197 million, 27 million above the level when the crisis started in 2008; and youth employment is even worse at 12.7 per cent.

This why trust in governments is plummeting with a huge gap opening up between what people expect of their governments and what they can actually deliver, all of this accentuated by a hyper-connected world where news and opinion travel faster than ever.

Long before Davos became the macca of the world’s rich and powerful, it was famous for being the setting of one of the most influential works in German’s literature, Thomas Manne’s novel, ‘The Magic Mountain’. Its story unfolds in the backdrop of an Alpine sanatorium in Davos where sick people go to get cured in the rarefied Alpine air.

The question is, did the worlds’ politicians and business leaders find their magic mountain this year?