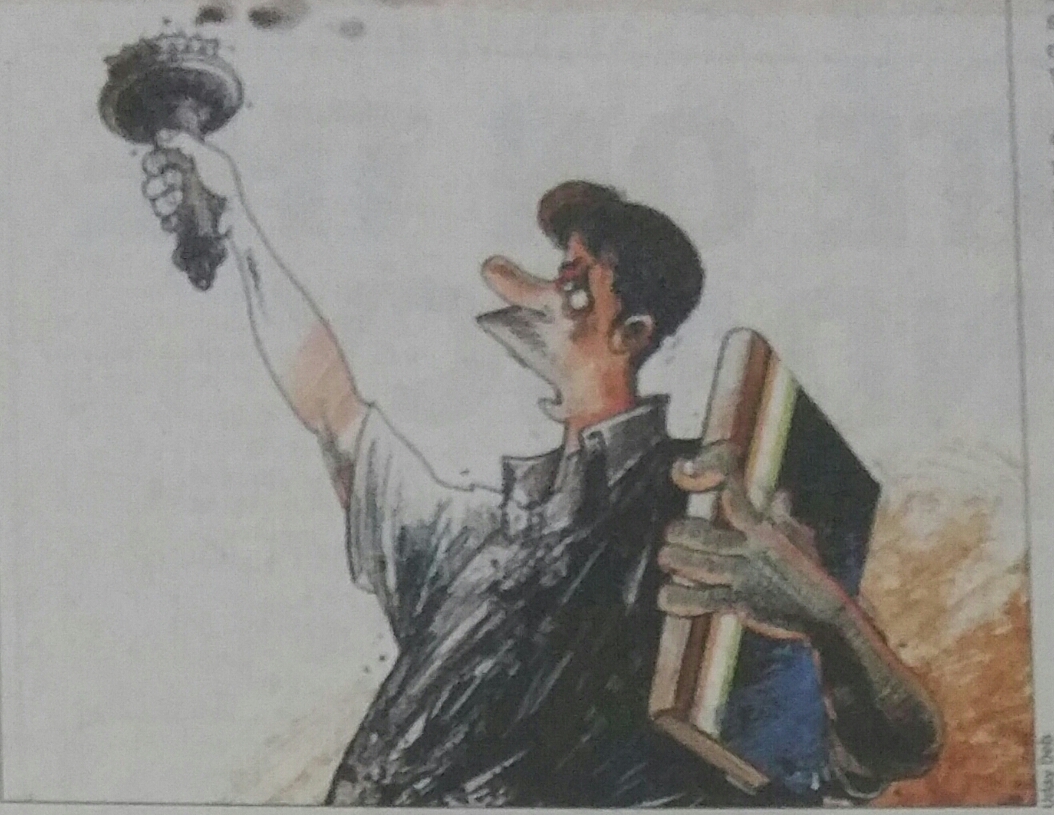 Imagine if an Indian corporate bigwig – say Vishal Sikka of Infosys – was asked by NIA, investigating the Pathankot terror attacks, to get his company to write software hacking into a confirmed terrorist’s digital or financial transactions. Now imagine if he flatly refused, arguing that this would breach Infosys’s confidentiality agreements with clients, leave them vulnerable to hacking by others, and allow security agencies to subsequently use such software to hack citizens at will.

If this scenario were true, wouldn’t an Indian CEO taking such a position immediately be condemned as “anti-national”? If JNU’s Kanhaiya Kumar can be charged with sedition for allegedly chanting antiIndia slogans (and without direct evidence, except doctored videos), then it stands to reason that any Indian company refusing a specific government request to nail terrorists might also be liable for sedition.

Precisely such a case is currently unfolding in the United States where the world’s most valuable company, Apple, is taking on the world’s most famous law enforcement agency, FBI, challenging a specific court order to unlock San Bernardino shooter Syed Rizwan Farook’s iPhone. Apple CEO Tim Cook’s framing of it as “chilling … government overreach” has thrown down the gauntlet. The progress of this case in the world’s most powerful democracy also holds interesting lessons for the guardians of patriotism in the world’s largest democracy.

Farook and his wife, self-starting Islamic State sympathisers, shot and killed 14 people in November 2015. Apple has opposed a California federal court’s order and a request from FBI director James Comey to write software code sidestepping an iPhone feature that erases data after 10 unsuccessful attempts. In the trade-off between security and personal freedoms – which most of us are willing to give up some of in the fight against terrorism – it doesn’t get much clearer than this. Yet, Cook refused.

He argued that enabling hacking into the phone is “too dangerous” and that “it is not just about the phone, this is about the future”. Apple says following the court order would threaten customers’ fundamental rights, breach American First Amendment free speech guarantees, and Fifth Amendment restrictions on police powers.

Interestingly, if the Kanhaiya case hangs on a colonial-era sedition law, the American case against Apple hangs on an even older law: the 1789 All Writs Act, signed by George Washington to empower courts to issue any necessary orders if no other tools are available. Cook’s public reasoning against creating a “backdoor” to the iPhone which can be used again and again is of course, also about protecting Apple’s corporate image at a time when Edward Snowden’s revelations raised serious global concerns about what has been called a “golden age of surveillance”.
Whatever your view on Cook’s position, of particular immediate interest to us in India, is how the debate is playing out in America. Virtually the entire Silicon Valley elite, who Prime Minister Narendra Modi serenaded last year, is backing Apple. Google, Facebook and Twitter have all supported Apple’s legal position. So has Microsoft, despite Bill Gates’s public backing for the FBI in this case.

Google CEO Sundar Pichai, spoke for many when he tweeted that though Google complies with lawful requests, enabling hacking by law-enforcement would set a “troubling precedent”. Pichai, who grew up in India, is a first-generation American. But no one questioned his patriotism.

The Apple case is turning into a watershed in the relationship between national security and personal freedoms but nobody has called these worthies “anti-national”. With the exception of Donald Trump, who says “who do they think they are”, the American political system has not degenerated into taunts of “anti-nationals” against the Silicon Valley giants.

When the Kanhaiya and Umar Khalid case first erupted on our screens, every nuanced argument for free speech was met with a simple jibe: Would any other country allow such slogans? Try doing this in the United States, angry patriots argued. Well, they should draw salutary lessons from Apple nationalism.

It is also instructive that the United States is also a country whose Supreme Court in 1989, and again in 1990, upheld the constitutional right to even burn the American flag. Tellingly, this is despite poll surveys consistently showing that most Americans didn’t like this. Fortyeight of 50 American states passed laws against burning flags but the US Supreme Court overturned them all.

Many of us in India are disgusted by slogans like “Bharat tere tukde honge”. But there is a difference between opposing such ideas and the slogans in and of themselves amounting to sedition.

Those who think this is sedition should read Walter Isaacson’s comment in Time magazine after the US Supreme Court’s 1990 judgment on the legality of burning the national flag. “The patriotic mind recoils,” he argued. “Reverence for the flag is ingrained in every schoolchild who has quailed at the thought of letting it touch the ground, in every citizen moved by pictures of it being raised at Iwo Jima or planted on the moon, in every veteran who has ever heard taps played at the end of a Memorial Day parade, in every gold-star mother who treasures a neatly folded emblem of her family’s supreme sacrifice.”

Yet, he went on, that was precisely the reason why the court declared against banning flag burning because such a ban violated free speech protections. The flag is revered precisely because it “represents the land of the free, and that freedom includes the ability to use or abuse that flag in protest”.

Simply being an angry national is not enough. We also need thinking nationals and to remember that the idea of the nation is far bigger than just the state.