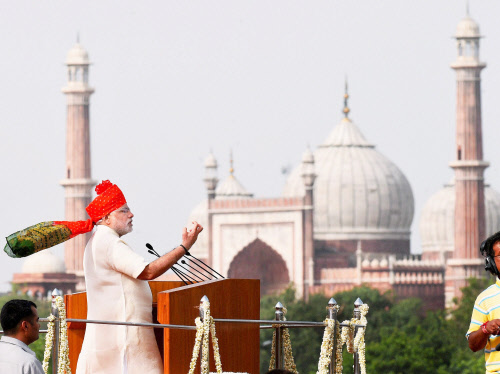 It was a different Independence Day for most journalists who cover the PMO, used as they were to getting previously written speeches by the Prime Minister ahead of his Red Fort performance. Mr Modi broke convention by speaking extempore for 65 minutes, by dispensing with the customary bullet-proof screen and by turning his speech into a soliloque on his vision of governance rather than a staid bureaucratic litany of governmental schemes.

Mr Modi also dispensed with convention by turning up in a polka dotted Gujarati red and green turban. Manmohan Singh, of course, always wore one by virtue of being a Sikh, but rarely have previous prime ministers made a sartorial statement by wearing formal headgear at the Red Fort. He could have chosen a saffron one, which would immediately have hijacked the headlines with debates about his Sangh pedigree. That could easily have been countered by pointing to the saffron in the tricolour, but the Prime Minister, ever conscious of media messaging, was smart in sidestepping that googly. He chose to make his message and not his ideological antecedents the primary story.

India’s 14th prime minister is different from his predecessors in more ways than one. Only Nehru could hold an audience for so long without reading from a script. His Independence Day speeches from the Red Fort focussed on specific themes. In 1948, he focussed primarily on the first Kashmir war, in 1950 on the creation of the new Republic. Shastri was beginning to build a reputation but died prematurely and Indira Gandhi was always a poor public speaker. Rajiv was handicapped at the Red Fort with his clear limitations in Hindi, his speeches getting more sarcastic headlines for his eponymous use of the phrase “hame dekhna hai” numerous times than for their substance. Narasimha Rao was a sphinx, better at strategising than setting a crowd on fire and Vajpayee chose to go by his speechwriters than by own considerable ability in rhetoric. The less said about Manmohan Singh’s performances at the Red Fort the better.

The chatterati were expecting Mr Modi to unveil a whole host of concrete proposals. Instead, he gave a politically charged statesman-like performance that was good even by his standards and focussed instead on broader vision. Packaged in the once-cynical wrapping of nation-building, this was a speech replete with a can-do spirit and about the deeper impulses that must drive India forward, rather than staid bureaucratic formulas.

It started with Modi’s self-designation of his office as “pradhan sevak (prime servant in service of country), rather than pradhan mantri (prime minister) and went on to express surprise at why public servants turning up on time should surprise anyone. Mr Modi also smartly played the outsider card, explaining to a national audience how Delhi’s elites have looked upon him as an “untouchable” and how he found not one united government but many, with government departments often fighting with each other, rather than working as one.
He also responded to critics who have castigated him for remaining quiet on incidents of intolerance by fringe elements and by his party’s allies by talking of shedding the “poison” of communalism and called for a 10-year moratorium on caste and communal violence. This was underscored by his insistence that his government would rule not by brute majority but by consensus. He was specifically referring to Parliamentary proceedings but the wider import of his message of not pushing through with numbers alone and by asking for ending all kinds of violence can also be seen as a direct response to those discomfited by recent incidents. 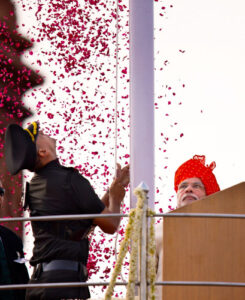 All the usual touch-points of the Modi model were there: creating a digital India, focusing on development and mobiles, cleanliness and toilets. And crucially, a focus on turning India into a manufacturing hub with ‘Made in India’ as its leitmotif. This last one was particularly crucial given that economists have long been pointing its centrality for the Modi promise of creating more jobs. The new schemes were there too. The Jan Dhan Yojana to bring the poor into the banking system and giving them an insurance safety net through debit cards and the Sansad Adarsh Gram Yojana to push Members of Parliament to create ideal villages. Crucially, Modi resisted the temptation to replace the old practise of naming every scheme after a Nehru-Gandhi by bringing in heroes from the opposite side of the ideological divide. In that sense, he seemed to be saying development should be above party politics.

The Planning Commission, that dinosaur of Nehruvian India long since past its us-by date, has also been given a long-overdue burial to be replaced by a super think-tank for government.
But the most moving part of Modi’s speech was perhaps his message of gender equality. “ I want to ask every mother and father,” he said, “ you ask your daughters ‘where are you going, who are you going with’. But do you ever ask your sons these questions? After all, those who rape are also someone’s son.” His message to end female infanticide and for women to be given an equal social space is not new but rarely has a prime minister put his own political weight and considerable public appeal behind such messages which are usually lost in boring bureaucratically written speeches.

Even as Gujarat chief minister, Modi specifically reached out to women voters. Each of his political campaigns at the state level was replete with special women-only sabhas and women voters were always crucial to his victory record in Gujarat. He seems to be adapting that same template in Delhi but this messaging of gender equality coming from a leader who party has often been seen as regressive on this front is a welcome one and above politics.

By not even mentioning Pakistan, by his message of development and social peace wrapped in soaring nationalist rhetoric and public service, this was a Modi looking to transcend himself into a statesman above the daily cut and thrust of politics. By projecting himself as India’s first worker, he has powerfully inserted himself as the personal face of the transformation he talks about.

Now he will have to deliver.