TO SLEEP OR NOT TO SLEEP

HomePolitics & Current AffairsTO SLEEP OR NOT TO SLEEP 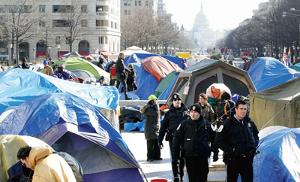 Eight months after all of India saw the ugly spectacle of the Delhi Police enforcing the full power of the state on Baba Ramdev’s supporters in the capital’s Ramlila Maidan, there is little to quibble with the Supreme Court’s primary finding that the police went overboard with “uncontrolled force”, that some of its teargas-shooting stick-wielding men members were negligent and others in “breach of their duty” just as the Baba and some of his followers were negligent themselves and in “breach of their legal and moral duty”. Both sides could have shown far more restraint, it could all have been handled far better and whatever the provocation the scenes of men in khakhi beating up women and the elderly certainly did not do our democracy proud.

Caught between a political Baba bent on pushing the line with verbal calisthenics and an edgy government that seemed to have had quite enough, were ordinary folk who thought they had turned out for a yoga camp but ended up being unwitting pawns in a larger political chess game.

So far so good, as far as the case itself is concerned, but the supporting judgment by Justice BS Chauhan about the right to sleep being a “fundamental right like a right to breathe, to eat, to drink, to blink, etc.” seems to have opened as many questions as the primary pronouncement has answered.

Without being flippant and with all due respect, let us consider the implications of this with a hypothetical example. In this case, the victims were a crowd of innocent, peaceful citizens being attacked by potbellied, crude beat-policemen; now imagine for a moment a case if a bunch of sleeping criminals on the run from the police are killed or captured in a surprise crack-of-dawn attack. If the right to sleep is a fundamental right, would it not be applicable still in such a raid? Is it too far-fetched to imagine the loud howls of protest that may then emanate about the violations of the basic human right to sleep?

Perhaps, but even the best-intentioned legal actions can sometimes have unintended consequences. Indeed, Justice Chauhan in his pronouncement emphasised that sleep is a fundamental requirement “without which the existence of life itself would be in peril.” “To disturb sleep,” he elaborated, “therefore, would amount to torture which is now accepted as a violation of human right. It would be similar to a third degree method which at times is sought to be justified as a necessary police action to extract the truth out of an accused involved in heinous and cold- blooded crimes.”

That seems pretty clear-cut. And where does the judgment leave, for example, the weary army soldier on the border working long hours and being deprived of regular sleep during emergency operations? Or, for that matter, your average insomniac?

The American courts recently faced a similar dilemma about sleeping protesters in the case of the Occupy Wall Street protesters. What is more paramount: the need of the state to impose public order or the protestors’ freedom of expression, through the mode of sleep-in protests?

The American judicial record has been mixed: in a similar case in 1984, the US Supreme Court ruled against protesters petitioning to sleep overnight on Washington’s National Mall, arguing that the larger public good was paramount. In 2000, though, a federal court in New York ruled in favour of activists who argued they had the right to sleep overnight on sidewalks near the mayor’s home as a form of protest.

Sleeping is an essential biological necessity for everybody, a pleasure for some, a luxury for others but unless someone is in a torture chamber, is disturbing someone’s sleep really anything more than what it appears to be? Was the Deepak Chopra-like–pontification on the benefits of sleeping really so necessary?

Perhaps we should sleep over it.