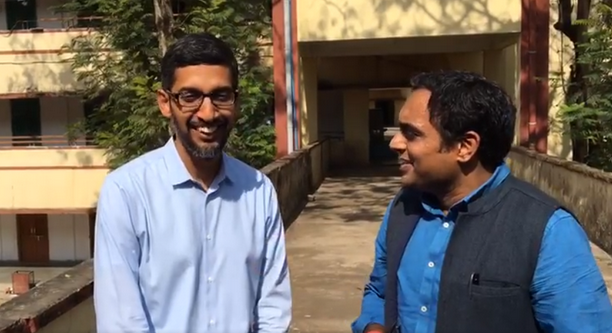 Sunday Times travels exclusively with the Google CEO as he goes back to his old college IIT Kharagpur after a gap of 23 years
Abe saale,” shouted out the boy from Madras to the mess staff. He had just been at IIT Kharagpur two weeks, didn’t speak much Hindi as he “came from the South” and had been trying to pick it by listening to how others around him spoke. “In my first couple of weeks I thought you called people that way,” he said with a wide grin. “The next thing I know the folks in the mess were quite upset and they shut down the mess. I wasn’t very popular that day,” recalled Google CEO Sundar Pichai as he regaled an amphitheater full of IIT Kharagpur students with his tales from 23 years ago.

Polite to a fault, genteel and — for a man who runs the world’s second most highly-valued company — he is down-to-earth, and amazingly particular about being respectful to everyone in the room. But was there another side to him as well, asked the “fire-side” chat moderator, Hitesh Oberoi, co-promoter, managing director and CEO of Info Edge. Did he bunk morning classes? “Of course,” came the answer. “It’s a rite of passage in college,” said Pichai. “I have to say I worked hard but we had our share of fun.”

On hostel memories and ragging
As we walked back into time with Pichai to his old hostel room B-308, in the B-west wing of Nehru residence hall, you could see he was visibly moved. “Could you give me a moment, please,” he politely requested the crowding camera crews, trying hard to gather his emotions as he looked around his old room and met its current occupants.

“It looks remarkably the same,” he told us a few moments later, as we walked through the corridor outside, just a “little bit cleaner.” “We used to play cricket here and all the glass windows would constantly get broken,” said the man who runs Google. “In winter, it used to get cold so we used to tape it up with paper. I made Maggi late in the night around here,” he pointed with relish to a corner.
Was he ragged? “A little, but it was all in good spirit…As a freshman you lock your room and you go out and when you come back your room doors aren’t open but everything inside has been rearranged, even the furniture. So it is quite a shock.”

On travelling third class, and Project Nilgiri
Later as we walk down Kharagpur’s railway junction, and he reminiscences about the time when he used to catch the Coromandel Express from here to Chennai, we also sample the high-speed free Wi-Fi that Google has enabled at the station as part of its promise to Prime Minister Modi under the Digital India project. Under a project that Googlers internally call Project Nilgiri, Wi-Fi connectivity was to be enabled at 400 of India’s biggest stations. How many have been connected so far? “In the first year, our goal was 100. We completed 110, and we look forward to doing more.”

The project has thrown up some very interesting trends. Data usage shows that Bhubaneswar railway station, for example, started getting more footfalls than Bombay Central, because students started coming in to hang out and use the Wi-Fi. “I find in rural areas, people actually come into the stations so they can use internet,” added Pichai. “It shows the demand Indian users have.”

Bridging the digital divide
Later, as we walk into Gokulpur, one of 60,000 villages in 10 states where Google has been training women volunteers (called Google saathis to use mobile phones) he listens intently to the women. With only 1 in 10 rural women an internet user, the digital divide is also a gender divide. So what has he learnt from the village women, we ask. “Something like this you don’t fully internalize till you experience,” he says. “You ask them what they would like to see and they say a puja, or god or a temple and they see it. That’s what draws them to internet. Then they find recipes, health information and so on and they all want more of it.”

On failing and learning
The first time he sat on a plane was when he went to the US to study at Stanford. Has India’s education system changed since and how should it change? Pichai weighs in on the side of creativity and learning by experimenting. As he told his student audience in Kharagpur, “I get surprised when I hear people start preparing for IIT in 8th grade. I hope they are really taking time to do things in a deeper way, understanding things deeper and learning by doing things. Setbacks actually don’t matter…It’s important to keep your dreams and follow those. Most of how life plays out is up to you and not on what happens outside of you. Take the long view.”

What is his advice to students? “It is important to get real world experience. In the US, like at Stanford, most people don’t choose their major till their final year. They do different things and find out what they are really passionate about…Academics is important but not as important as it is made out to be.”

Later as he picks up a bat to knock a few balls around at an impromptu pitch in Gokulpur, he says he didn’t make it to his hostel cricket team but loved to watch Gavaskar bat. Who is his favourite today? “Watching Virat Kohli through the last year has been pretty amazing. I didn’t think somebody could have an average of over 50 in all three forms of the game,” he signs off.