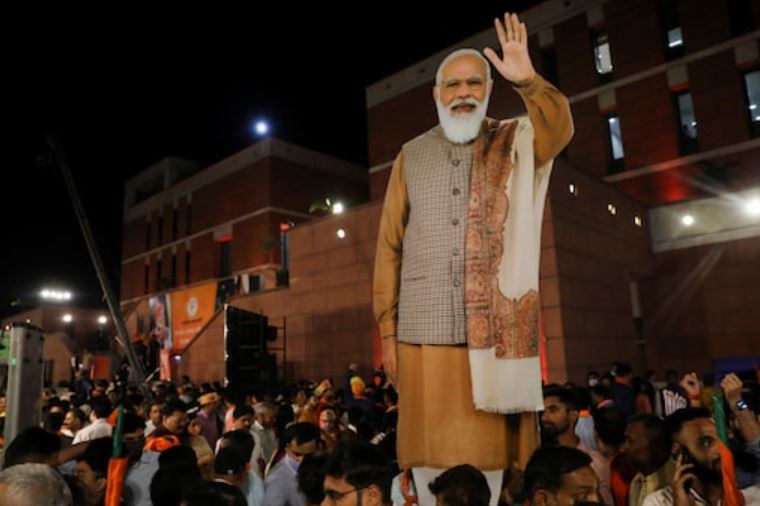 Narendra Modi has now been with the Bharatiya Janata Party (BJP), a party he officially joined in 1987 after initially serving in the RSS, for 35 years. From the time Modi became the BJP’s preeminent leader, after taking office as Prime Minister in 2014, he has drastically reshaped the party.

It may be difficult to imagine today in the era of BJP’s political dominance, but when Modi joined the party in the late-1980s, it had only two seats in Parliament. It was yet to win power in his home state of Gujarat, where it has not lost a state Assembly election since the mid-1990s. And it was yet to launch the Rath Yatra to Ayodhya from Somnath, that catapulted its first major national expansion.

Modi’s first responsibility in the BJP was to organise the party’s campaign for the 1987 Ahmedabad civic polls, which it eventually won. And Modi’s first wider recognition as a political leader outside of Gujarat, of course, came due to his role as a key organiser of the Gujarat leg of the Somnath-to-Ayodhya Rath Yatra organised by LK Advani in 1990. It meant that by 1991, national newspapers were already referring to him as the “architect of the BJP’s phenomenal growth in Gujarat”.

At a big-picture national level, however, when Modi became the BJP’s prime ministerial candidate in 2013, it was still an urban-focused and upper caste-dominated Brahmin-Baniya party. Between 2014 and 2022, Modi not only transformed it into the world’s largest political party, but, along with Amit Shah, he also helmed a fundamental structural retooling of the party and its support base.

Modi created a ‘New’ BJP. This was different from the ‘Old’ BJP in five ways:

A large part of the BJP’s growth post-2014 was built on its remaking into the predominant rural party in the Hindi-speaking states of North India that make up 225 of the Lok Sabha’s 543 seats. This was a big shift for a party that was once derided as a city-only force with a narrow upper-caste base.

The most striking illustration of the BJP’s rural growth comes from vote shares. In the Hindi heartland’s 127 rural constituencies, the BJP managed to win over 40% vote share in only 16.5% seats in 2009. In 2014, it more than tripled that number to 57.4% of rural seats and upped it further to a whopping 74.8% in 2019. In multipolar contests, a 40% vote-share threshold is a premier performance benchmark. It indicates that the party had turned into the default party of the village.

The BJP was considered an upper-caste-dominated party for many years. This perception has long been out of touch with reality. In June 2020, Prime Minister Narendra Modi publicly pointed out that the BJP was represented by 113 OBC, 43 ST and 53 SC MPs in the Lok Sabha. In other words, a full 37.2% of BJP Lok Sabha MPs were OBC, 14.1% ST and 17.4% SC. This meant that a whopping 68.9% (209) of all its 303 Lok Sabha MPs elected in 2019 were non-upper castes and from castes that were traditionally considered lower down in the caste hierarchy. This is strikingly on par with the widely accepted national share of the population of these castes: 69.2%.

When I created the Mehta-Singh Social Index to study the caste of Indian politicians, with my colleague Sanjeev Singh, we found a striking illustration of this shift at the state-level. To give a bird’s view of the numbers, OBCs and SCs accounted for as many as 57.5% of BJP’s UP Lok Sabha candidates in the 2019 general election, 52.8% of its candidates in the 2017 Assembly polls that it swept, 50% of its office-bearers in the state in 2020, 48.1% of Chief Minister Yogi Adityanath’s council of ministers and 35.6% of the BJP’s district-level presidents.

These numbers revealed by the Mehta–Singh Index showcase why it is misleading to characterise the new BJP under Modi and Shah as a party dominated by upper castes. The BJP, between 2013 and 2019, saw a remaking of not only its social support base but also of its internal organisational systems with OBCs being given centre stage.

PARTY OF THE POOR: DIRECT-BENEFIT TRANSFERS

A significant part of the BJP’s growth under Modi has been driven by poor voters. Much of this was propelled by the creation of a new social welfare net, enabled by unique ID systems, mobile phones and data and a tech-enabled targeting of government schemes that simply wasn’t possible earlier.

The Modi government inherited a structure for Direct Benefit Transfers (DBT) transfers in 2014 that had gone through the testing phase, with several schemes and the backend tech stack in place to build on with Aadhaar. Modi gave the initiative full political backing.

These direct cash transfers for a wide range of schemes—LPG, rural housing, toilets—became the basis for a new kind of political mobilisation for Modi and the BJP

A significant driver of the BJP’s growth under Modi has been the creation of a new women’s vote. Historically, there has been a gender divide in India on voting. Women voted less than men until the early 2000s and mostly voted more for the Congress than the BJP. The 2019 election was the first in Indian history where the women voter turnout (67.17%) was slightly higher than the male turnout (67%). And in most key states, more women voted for the BJP than the Congress.

There is enough evidence to show that the BJP’s political outreach to women is personally led by Modi. His cultivation of a new rural women constituency put them at the vanguard of the party’s rise as India’s pre-eminent political formation.

Modi’s two governments on average had a larger share of women ministers than Manmohan Singh’s two governments that preceded it as well as Vajpayee’s NDA regimes. The first full-term BJP-led government under Vajpayee (1999–2004) had a yearly average of 9% women ministers. Manmohan Singh’s UPA-1 and UPA-2 upped women’s representation in the Union government’s council of ministers to 11.2% on average. Modi’s NDA-1 and NDA-2 further increased women’s share of ministerial portfolios to an average of 12.7%.

Under Modi and Shah, the BJP instituted important course-corrections on the representation of women in the party’s central organisation. These leadership changes ensured for the BJP the highest proportion of women among national office-bearers in India when compared with other major outfits that had ‘national party’ status. The BJP had as many as 16.9% women as central officer-bearers in October 2020. This was more than women’s representation in the central leadership of the CPI(M) (14.7%), Trinamool Congress (13%), CPI (11.1%), NCP (10.8%) and Congress (8.5%).

A fifth pillar of the BJP story under Modi has been its growth in new catchment areas outside the Hindi heartland. Through a strategy of mergers and acquisitions as well as deep tactical flexibility, BJP expanded into new areas where it never had a significant presence earlier.

The BJP’s national election victory in 2014 presaged the most dramatic realignment of political power equations in the north-eastern states since Independence. Until 2016, the party had never been elected to power in any of these eight states. It had briefly formed a government once in Arunachal Pradesh (2003) when Gegong Apang defected and merged his new regional outfit with the party, before he returned to the Congress.

The party’s first ever victories in Assam (twice) and Tripura (where it ousted the CPI-M) were historically significant milestones. In two other states, Nagaland (March 8, 2018) and Meghalaya (March 6, 2018), the BJP assumed power as a junior coalition partner in alliance governments led by larger regional parties. By mid-2021, the only north-eastern states that the BJP did not control were Mizoram and Sikkim. Even here, however, ruling parties in both states are formally still members of the North East Democratic Alliance (a BJP-led coalition formed on May 24, 2016).

Taken together, the five big shifts outlined here reflect how radically Narendra Modi has transformed the BJP as a political outfit.