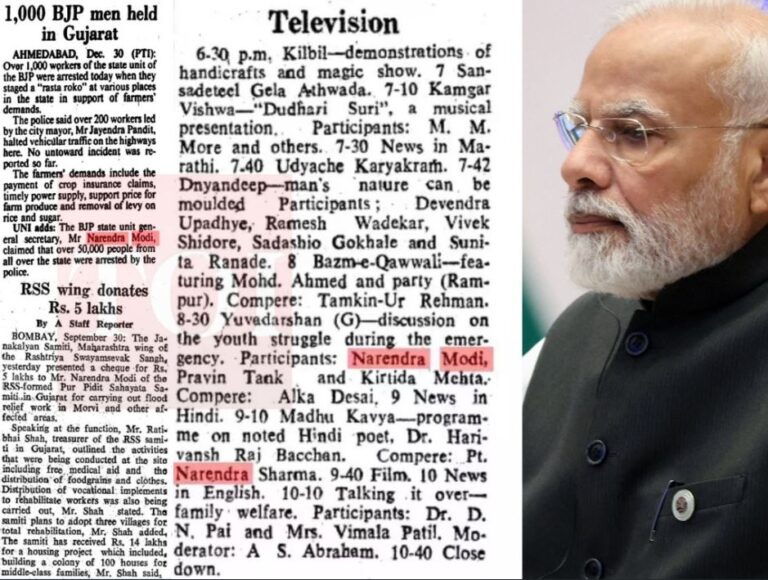 As Prime Minister Narendra Modi turns 72, he remains India’s most popular mass leader. He has continuously remained in constitutional office for 21 years, ever since he first became Gujarat  chief minister in October 2001.

He was an RSS pracharak and aBJP  apparatchik in the years before he became a mass
leader. While a great deal has been written about the last two decades of the PM’s political career, Nalin Mehta delves into the past to unearth the first time Modi’s name first appeared in the public domain and in the pages of The Times of India.

Narendra Modi’s name first appeared in the pages of TOI in 1978.

Modi first in TOI as an Emergency activist, 1978: The future prime minister’s maiden appearance in newsprint came a few months after the lifting of the Emergency. This was because Modi participated in a television programme, Yuvadarshan, on ‘The youth struggle during the Emergency’. Anchored by Alka Desai, the TV discussion featured the young Narendra Modi along with Pravin Tank and Kirtida Mehta. A notice on this discussion which aired at 830 pm on 23 May 1978 – with Modi’s name on it – appeared in the ‘Television’ section of the Times of India.

Modi then in TOI as a pracharak and flood relief worker, 1979: The second time Modi appeared on TOI pages was during relief operations for the massive devastation and hundreds of deaths caused in Morbi by the failure of the Machchu Dam in Gujarat on 11 August, 1979. The tragic Morbi dam burst, which submerged a vast area in Gujarat, is listed by the Guinness Book of World Records as the worst dam failure in history.

This was one of India’s worst disasters and Modi appeared in the pages of TOI in his then role as a RSS pracharak coordinating relief efforts on behalf of the organisation. A month after the dam failed, TOI reported on 30 September, 1979, that Narendra Modi of the RSS-formed Pur Pidit Sahayata Samiti (Committee to Help the Dam Afflicted) received a cheque of Rs 5 lakh from the RSS’s Maharashtra wing for relief work in the affected areas around Morbi.

Overall, a TOI staff reporter noted that the Samiti headed by Modi, raised Rs 14 lakh for relief work, conducted free medical aid and distributed foodgrains and clothes for those affected by the disaster.

Narendra Modi’s name first appeared as a politician in the pages of The Times of India in 1988, as the organiser of an anti Congress rasta-roko agitation on farmer demands in Gujarat. He had just joined the BJP, from the RSS as general secretary of the party in Gujarat and his name appeared in connection with a rasta-roko the party had organised in Ahmedabad in support of farmer demands against the then Congress government of Amarsinh Chaudhary.

At that time not many outside the state had heard of Modi. The recently anointed state BJP leader featured in TOI reporting on the farmer agitation, claiming that over 50,000 BJP workers were arrested across the state as part of the protests. Modi as ‘architect of Gujarat BJP’, 1991: ‘The first wider recognition for Modi came when he became a key organiser of the Gujarat leg of the Somnath-to Ayodhya Rath Yatra organised by LK Advani in 1990.’

BJP was yet to win Gujarat, which it has not lost power in since the mid-1990s. However, Modi’s role in the Somnath–Gandhinagar leg of the Yatra meant that, by 1991, TOI was already referring to him as the ‘architect of the BJP’s phenomenal growth in Gujarat’.

(Edited extracts from Nalin Mehta, The New BJP: Modi and the Making of the World’s Largest Political Party, Westland)

Why the ‘new BJP system’ will dominate India till 2047