Once there was a GANEFO 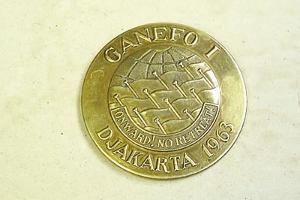 The world turns on its axis, night comes after day, the Olympic Games are held every four years. The Olympics are so ubiquitous, so much a predictable, fixed feature of the rhythms of the world that it is easy to forget that they essentially began as a private initiative by a French aristocrat. Amid the peaking excitement over the London Games it may be difficult to imagine but there was a time when it was far from obvious that the Olympics would become so widely accepted a global event. There were other competitors who could have eclipsed the Olympic Games or prevented its rise as the preeminent gathering in global sport.

One such moment was the now barely remembered Games of the Emerging Forces (GANEFO) promoted by Indonesia’s President Sukarno in the early-1960s. It carried the potential to seriously damage the Olympics and India played a central role in this story. India’s uniqueness has been that it may not ever have won big medals at the Olympics but it has always played a big role in its politics. So it was in the GANEFO episode which emerged out of a complex interplay of international power politics between Nehru and Sukarno.

The story began with a diplomatic fight at the 1962 Jakarta Asian Games where there was a problem over Taiwanese and Israeli athletes. Both countries were recognised by the International Olympic Committee (IOC) but not by Indonesia and things came to a head when a Taiwanese official was returned from Jakarta airport in August 1962. India, about to be invaded by China in less than three months, defended the Taiwanese case and called for punitive action against the Indonesians, even asking for the title of the Asian Games to be taken away from Jakarta.

Soon enough, on September 3, 1962, the Indian embassy in Jakarta was stormed by an irate mob. Another mob attacked the hotel where Indian officials were staying, searching room-by-room for G D Sondhi, the Indian manager who wanted to withdraw Jakarta’s Asiad status. Sondhi escaped and flew back to Delhi, even as the Indian football team playing for gold in the finals was virtually treated as an enemy nation. Ironically, it was India’s greatest ever victory in football but such was the booing by the local crowd that an official Indian report noted: “the National Anthem was drowned in the booing.”

Sukarno, who only years earlier had stood shoulder-to-shoulder with Nehru at the historic Bandung summit, saw the Indian protests as a backstabbing affront. He denounced the Olympics-Asian Games circuit as an “imperial tool”, and announced that he would create his own kind of Olympiad: the Games of the New Emerging Forces.

It may have originated from a spat with India but Sukarno also saw in GANEFO the opportunity to become the leader of the ‘New Emerging Forces’ in a new world order. His biggest ally was Beijing. The People’s Republic of China which was excluded from the Olympic movement at the time saw GANEFO as an opportunity to gain global legitimacy. China pulled out all the stops “to persuade Asian and African countries to join the games” and gifted the Indonesians with $18 million to organise it.

This was a direct challenge to the Olympic movement and as many as 42 countries took part in the first Games at Jakarta that began on November 10, 1963. This was essentially a battle which saw the International Olympic Committee (IOC) and Indian officials on one side and Indonesia and China on the other. Just as the Indians were scared of losing their hegemony in Asian sport management, the IOC was worried about the prospect of a rival body. When Cambodia hosted a mini-‘Asian’ GANEFO in 1966, 37 countries participated. Again China underwrote the event by building a brand-new stadium. Beijing was using sport as a tool of influence. IOC president Avery Brundage was seriously worried about a global sporting split engineered by Beijing.

The IOC need not have worried. The GANEFO initiative died a natural death with Sukarno’s relinquishing of power in 1966. The new Suharto regime was not interested in pursuing sport diplomacy at a time when the Indonesian economy was in grave crisis. Diplomatic relations between China and Indonesia deteriorated and GANEFO lost its primary sponsor. Cairo was to host GANEFO II in 1966 but with the Chinese and the Indonesians not interested any more, the lack of financial resources meant that GANEFO was given a quiet burial.

GANEFO is now a forgotten chapter in the history of international sport but it underscored yet again the primal link between sports and national aspirations. The Olympics movement survived the blip and has not had a challenger for 50 years but at its heart it remains closely linked to the driving impulse of cities and nations to use it as a soft vehicle for international power projection.

This is precisely why London is spending an unprecedented $10 billion that it can ill-afford at a time of austerity. Whether it is worth it, is another question. For now, let the games begin.

(Nalin Mehta and Boria Majumdar’s book Olympics: the India Story — revised and updated edition — has just been published by HarperCollins)