HomePolitics & Current AffairsLanguage of the gods needs revival but not by...

Anxiety over Sanskrit’s slow death as a living language, which lies at the heart of the current language dispute over German, predates the cultural nationalism of BJP and RSS. As far back as 1857 Gujarati poet Dalpatram announced that the language of the gods had died. Bajirao II, the last Peshwa, had “performed its after-death rite with great pomp” and the best of kings observed “its yearly memorial”, he lamented.
It was this sense of loss that led to Sanskrit being introduced into the Constitution’s Eighth Schedule as a national language in 1949. But so poor was its health at Independence that the first five Sahitya Akademi Awards in Sanskrit literature (1956-1966) were given to English and Hindi works on Sanskrit culture. Official patronage meant that Sanskrit survived only on “government feeding tubes and oxygen tanks”, as scholar Sheldon Pollock memorably argued.

As the sublime language of Kalidas, of Kalhana’s Rajtarangini and as mother of most modern Indian languages, it is imperative to keep Sanskrit alive. But this can’t be done by compulsory education for all children. Even at its height in antiquity, Sanskrit was rarely a mass language. It was the language of learned discourse, high literature, scientific and metaphysical enquiry. The Ashokan edicts, for example, were not in Sanskrit but in Prakrit using Brahmi script and even in Aramaic and ancient Greek.
Languages cannot be divorced from their social function. It is futile to try and artificially transform them into mass tools of communication by ministerial fiat. The prudent path is to create centres for Sanskrit excellence, promote cutting-edge new scholarship and translations. For all the nationalist noise about Sanskrit, high learning of it has dwindled to such a low that few renowned experts remain in India.

The best work on classics is now being done abroad by foreign scholars. Even a philanthropic project like the Murty Classical Library of India, which aims to make ancient classics from the last two millennia available in English, is run by distinguished scholars based out of the universities of Columbia, Heidelberg, Boston and Jerusalem. This was not so a few decades ago when home-grown institutions like Bhandarkar Oriental Research Institute flourished. Scholars point out that thanks to the decreasing number of Indian linguists in most other ancient Indian languages as well, we may be in danger of losing not just our knowledge of ancient works but our historical memory itself.
Contrast this with China where star scholars like Yi Zhongtian and Yu Dan have massively expanded contemporary interest in ancient knowledge and languages by creatively using the power of television and writing ‘fast-food’ bestsellers to make Confucius cool again.

Yiddish linguist Max Weinreich observed that a “language is a dialect with an army and an air force”. HRD Ministry’s enforcement directives on Sanskrit have also given it a bureaucracy. Yet as long as it is not seen by students and parents as a language of upward mobility in a globalised world, this powerful army will have no lands to conquer. 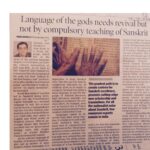