After Raghuram Rajan: Challenges for the Next RBI Governor 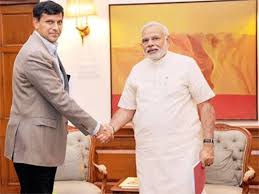 By now everything that had to be said about Rexit has been said. Now that RBI Governor Raghuram Rajan has finally decided to return to his academic perch at University of Chicago’s Booth School of Business, the big question to answer is not why the Modi government didn’t move the extra mile to retain him but what next after him. What is the legacy he leaves behind for his successor and what challenges will s/he face from September 2016 onwards?
The first question is about the successor. Here, the government has quickly denied that a search panel (Financial Sector Regulatory Appointment Search Committee) headed by the Cabinet Secretary would have a role in shortlisting candidates. The next RBI Governor, would instead by chosen by the Prime Minister and Finance Minister together.
This is as it should be: after all the RBI Governor’s post has Cabinet Secretary status and it would have been odd in the government setup for a search panel headed by an officer of equivalent rank to make this selection.

The last time a similar panel did a similar selection job for the post of SEBI chairman, the government ended up ignoring its candidate recommendations and earlier this year gave current SEBI chief UK Sinha another extension for a year. Sinha, who was initially appointed SEBI chief for 2011-14, initially got a 2-year extension and was given another 1-year extension on 16 February 2016.

Given the high-profile nature of the RBI governor’s role, especially in the current context, it cannot but be a political choice at the highest levels. Names like Subir Gokarn, former RBI Deputy Director and Executive Director at IMF; Rakesh Mohan, another former RBI deputy governor currently with Brookings India; Arvind Subramanian, Chief Economic Advisor; and Shaktikanta Das, Economics Affairs Secretary are doing the rounds now.
Whoever the government eventually decides to appoint, it is likely to do so well in advance of the end of Rajan’s term, to avoid market speculation. The next RBI Governor will be filling big shoes and the challenge as the Times of India’s Sanjiv Shankaran points out, is two-fold:

Rajan’s cleanup was obviously making a lot of crony-capital businesses unhappy but cleaning up the banking-corporate nexus is crucial for the longer-term health of the Indian economy and will be a major challenge for Rajan’s successor.

For a detailed chat on what after Raghuram Rajan, and the challenges for the next RBI Governor, see the Times of India discussion between Nalin Mehta and Sanjiv Shankaran.