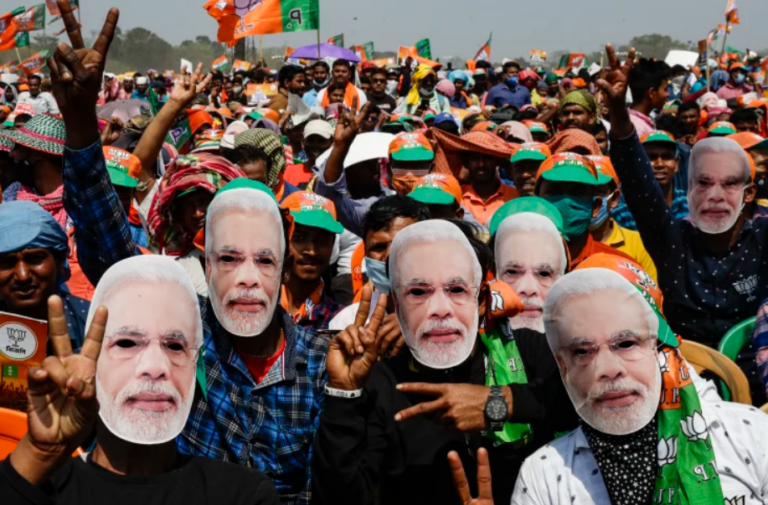 Not far from Connaught Place, the frenetic hub of India’s capital Delhi, is the headquarters of the world’s biggest political machine: the Bharatiya Janata Party, or BJP.

The party boasts more than 170 million members after a five-fold increase in the past eight years. Only a handful of nations have a bigger population than that. Membership of the famed Chinese Communist Party – around 96 million – pales by comparison……….

Modi’s popularity and the BJP’s aggressive pro-Hindu politics have been crucial electoral assets. But political scientist and journalist Nalin Mehta argues in his new book The New BJP that the party’s electoral success goes much deeper.

The BJP was once seen as a party for city-based upper-caste voters but has now managed to broaden its appeal to lower-caste and other social groups at the village level.

“The BJP has become the most socially representative party in north India, bar Muslims,” says Mehta. “The BJP’s election wins have also notably been in seats reserved for Dalits (formerly known as untouchables) and tribal (or indigenous) populations. Through a strategy of mergers and acquisitions, the BJP has further expanded politically into newer catchment areas geographically like India’s north-east, where Christian voters are significant and, in some states, constitute the majority.”

To achieve this the BJP enlisted party officials and local candidates from a range of social backgrounds, including women. It has also used welfare programs, focused on housing, sanitation and domestic gas supply, to create a new voting class of beneficiaries called “labharthis” and to target women voters.

“They have really changed the playing field and that is one reason more women, particularly in rural areas, are voting for them,” says Mehta.

Dr Vinay Sahasrabuddhe, a former national vice-president of the BJP, claims all members have the opportunity to rise through the party ranks.

“BJP comes across as a party of dedicated and credible leaders and perhaps the only party that talks of politics of performance through good governance and development,” he says.

“In BJP any of our volunteers can reach at the highest position in the party, unlike most other parties. Besides, BJP is a nation-first party with nationalism as its core value. Naturally, joining BJP becomes a hugely attractive proposition.”

Sahasrabuddhe, who has been personally involved in BJP membership drives, says a hallmark of the party is that members are “active, not just limited to tokenism”.