Games of Self-Respect: A Colony at the Olympics

EXTRACT
India was the first colonised Asian nation to take part in the Olympic Games. Its embrace of the Olympic movement, while still a British colony, was no mere coincidence. It was intricately linked to the forces of nationalism, the politics of self-respect and indeed the inculcation of what has been called the British ‘Games Ethic’ among Indian elites. Colonial India’s early Olympic encounter was born out a complex interplay of all three factors and it forms a crucial missing link in the story of Indian nationhood. Historians now widely recognise the important role played by sport in the creation of identities and social imaginaries. Indeed it is now widely recognised that Japan, the only Asian country, with a longer Olympic history than India’s, embraced Olympism partly because of a deep rooted desire to showcase Japanese modernity after the Meiji Restoration and to take on the ‘West’ on equal terms. Olympism became so important for modern Japanese identity that when Tokyo bid for the 1940 Games it went so far as to tie its candidature to the celebrations of the “2,600th anniversary of the Japanese empire” pulling out all the stops in an aggressive diplomatic campaign that split European nations down the middle. While campaigning for Tokyo’s bid for the 1940 Games, Count Soyeshima Michisima, Japan’s delegate to the IOC, convinced Mussolini to withdraw Rome’s candidature largely on the back of the claim that 1940 coincided with the 2,600th anniversary of the Kigen. Baron Yoriyasu saw Tokyo’s victory in the Olympic race as affirmation not just of Japan’s athletic progress but as proof that “renascent Japan has advanced in worldly and grand terms” (Collins, 2006, pp. 1132–1133). Tokyo’s emotional gambit, combined with some smart cultural hard-sell, succeeded when Mussolini withdrew Rome’s bid. Though the 1940 Games never took place, the politics of Japan and the 1940 Games provide a fascinating study of just how central sport can become for nationalistic identity making (Collins, 2006). In this context, in India, a number of historians have finely documented how the imperial game of cricket became an arena for colonial Indians to fight for political recognition (Guha, 2002; Cashman, 1979; Bose, 1990). Yet, despite its great importance, cricket never gave ‘India’ – the nation – any significant international triumph until well after independence. It was in Indian hockey, and in the Olympic Games, that the nationalist aspirations of colonial India found full expression. This chapter draws out the pre-history of how this came to be so, of why colonial India embraced the Olympics and why the still nascent and obscure Games started by a Swiss aristocrat in 1896 became so important for the creation of a nascent Indian identity. 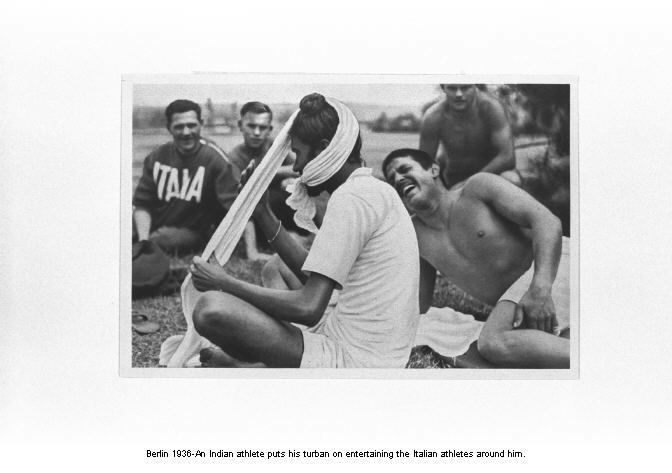 Berlin 1936: An Indian athlete tying his turban with Italian athletes around him

The history of Indian sport can only be understood in light of the fact that sport was always inculcated as a crucial binding factor in the British Empire. Forged in the nineteenth century by traders, military officers, missionaries and proponents of ‘muscular Christianity’, the bond of sports was not only maintained and extended by the governing circles, but carefully cultivated among a selective section of the population through informal forms of exchange rather than authoritative imposition. Sports became a source of considerable cultural power, conveying through its different forms a moral and behavioural code – the Games Ethic – to connect and unite the far-flung British territories in Asia, Africa, the Caribbean, North America, Oceania, and of course, the British Isles. The introduction of all organised Western sports in India, from hockey to cricket to soccer, can all be traced to this idea. It took until 1920 for India to participate in the Olympic Games andno formal institutional mechanism for supporting Olympic sport was established in the sub-continent till the early 1920s. But by the mid-1920s, driven by nationalist enterprise and princely patronage, India’s Olympic
structure was well in place.

The Indian Olympic Association (IOA) as we know it today was formed in 1927. It was the second oldest national Olympic Association in Asia after Japan, which was established in 1912. A strong Indian contingent participated in the Amsterdam Games of 1928 winning India her first gold medal in hockey in the very first year of official participation. A precursor to the IOA had been formed in 1923 with the same name and it had served the Olympic cause for three years till 1926 before being shut down. At a time when nationalist sentiment in India was gaining pace, the Olympics were the only international arena where Indian-ness could be projected in the sporting field. India’s participation in the Olympics, from the 1920s, was an important watershed for the politics of colonialism. Indians went to participate in the Olympics, on equal terms with the British, at time when the colony was not even invited to the first British Empire Games (1930) (later Commonwealth Games) in Canada (Moore, 1989). Apart from Bermuda, British Guyana and Newfoundland, only the white settler dominions of Australia, South Africa and New Zealand were invited to the first Empire Games. The organisers even paid for the costs of athletes from the white settler dominions and the exclusion of non-white athletes from big colonies, despite India’s success at the Olympic Games meant that the Empire Games were fraught with tension.1 The decision to prohibit India from competing at the first British Empire Games ignited angry demonstrations from both the pro-British aristocracy and the nationalist middle classes.2 India never participated in the Commonwealth Games until independence in 1947 and it is well documented that it was partly the chance to compete in the Games that persuaded Prime Minister Nehru to keep India in the Commonwealth. The Games helped provide an arena for nationalist ambition and anti-colonial sentiment and while they extended imperial cultural power, they also offered an opportunity for the once subordinate and colonised to ‘beat the master at his own game.’ This was now true for the African, Asian and Caribbean Commonwealth as it already was for the white settler dominions like Australia, Canada and New Zealand.

This chapter documents the origins of Olympism in India and what it meant for India, for the British Empire and for the global Olympic movement. As a movement led by nationalist elites and princes, the early story of Indian Olympism is also the story of a global league of upper-class elites, connected through patronage networks in Europe, who passionately pushed the Olympic ideal. Until the 1920s, the Olympics were largely a Euro-centric enterprise, but India’s embrace of Olympism in the 1920s was also simultaneously accompanied by a powerful push for diffusing the Olympic ideal in Latin America and South-East Asia. As this chapter will show, in all three cases, the same strategy was followed: the use of the global network of the Young Men’s Christian Association (YMCA) and the co-option of local elites with enough private resources and European contacts to liaise with the Olympic movement’s center. In that sense, the origin of Olympic sport in India that this chapter documents is a missing piece in the global story of Olympism. In a Europe divided by war, the IOC pushed this expansion as a strategy for survival and in India the ideal was appropriated by elite nationalists as a new avenue for self-respect, modernity and identity politics in the sporting arena. Olympism came to India as part of the processes of globalisation, decades before the term itself became fashionable. But once it was initiated, it was appropriated by and became inseparable from the forces of nationalism to begin with, and the centrifugal regional tendencies thereafter.