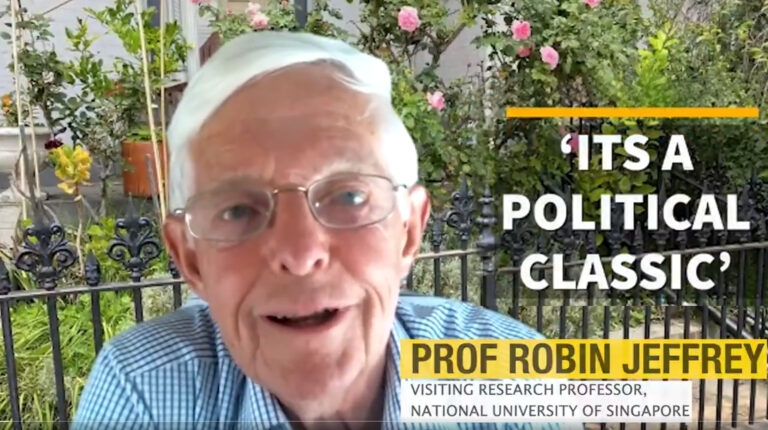 Writing about the book, Professor Jeffrey said, ‘I’ve had the pleasure of reading drafts of all the chapters of Nalin Mehta’s manuscript on the Bharatiya Janata Party. In my opinion, it is going to be a classic, a book that will be read widely and for a long time. Its readership will include scholars, political activists and anyone whose job or interest lies in understanding contemporary India and the processes that have shaped it.

It’s on its way! Nalin Mehta’s The New BJP: Modi and the making of the World’s Largest Political Party will hit bookstores soon.

First, the book is founded on an impressive original database, assembled for the first time for this project. This database enables Mehta to test and analyse the changing characteristics and growth spurts of party membership in ways that have not been done before.

Second, Mehta uses his energy and connections as a journalist to reinforce the book with extensive interviews. Again, they are new and original, not re-hashes of other journalists’ work. They are detailed and often colourful. More important, they enable Mehta to test the findings of the data-base by asking questions of both senior and rank-and-file party members. Do people on the ground “fit” with what the data appear to be saying?

Third, Mehta is a journalist and media analyst, but he is also a scholar with a PhD and a groundbreaking book, appreciated both by academics and general readers, on the explosion of the Indian television industry in the 1990s. His

scholarship has enabled him to give a historical depth to the new book—to go back to original sources to explore how individuals, parties, organizations and ideas rise and fall.

Fourth, Mehta can write. In the manuscript, he finds his voice as a detective, an analyst and a storyteller. It is a voice that only someone with his varied experience can achieve.

Fifth, the book raises big questions for political and social studies. To what extent, and how, do individuals shape political parties? To what extent do communications limit or empower political organizations? How unique is India’s recent political experience and how much is it part of trends and processes? What is to be learned from India about political organization and democratic government in the twenty-first century? The book’s focus on the way that the political convictions of a few can be disseminated and organized using twenty-first-century technologies has international significance.

This is an important and readable book. It is going to be around for a while.’

Professor Jeffrey is an eminent scholar, and author/co-author of several seminal books on India, including Waste of a Nation: Garbage and Growth in India, The Great Indian Phone Book, India’s Newspaper Revolution: Capitalism, Politics and the Indian-Language Press,  and The Decline of Nayyar Dominance.