Hybridity and subversion: the Olympic flame in India 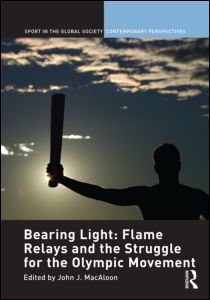 Abstract
This article presents the results of a field study of the 2008 Olympic Flame Relay in Delhi, India, where Tibetan and pro-Tibetan protests against the Chinese Olympic hosts generated a state security transformation of Olympic ritual and a parallel Tibetan counter-performance. These events are placed in the context of earlier Indian practices of indigenization of the Olympic Flame Relay in 1960, 1964, and 2004. If Delhi 2004 represented a further hybridization of indigenous and international ‘best practices’ models for flame relays, Delhi 2008 demonstrated the failure of the standard model to cope with the political and moral forces unleashed when the host nation is as challenged as China in the field of human rights. This article concludes with an analysis of the Queen’s Baton Relay for the 2010 Delhi Commonwealth Games, showing the chaotic caricature that results when transnational standard practices for relays of sports festival icons are completely set aside.
This article was republished in John J. Macaloon (ed.), Bearing Light : Flame Relays and the struggle for the Olympic Movement (London: Routledge, 2013)