Party of Ram: BJP has won the culture war on Ram. Time now to focus on the economy 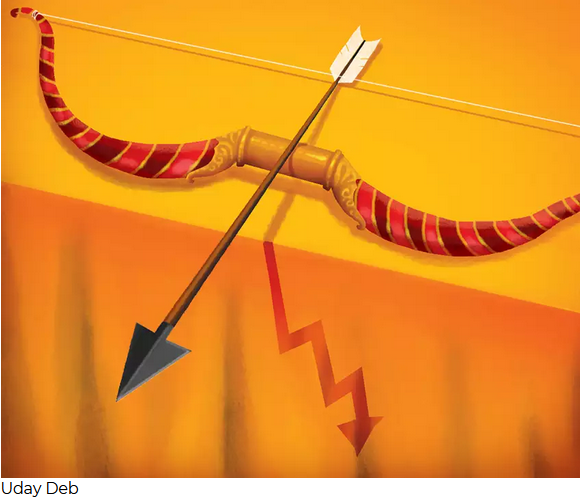 It’s the death of the republic, lamented one of the few liberals on my school alumni WhatsApp group. As the imagery of Prime Minister Narendra Modi presiding, like a Hindu suratrana, over the bhumi-pujan of the new Ram temple in Ayodhya beamed over the airwaves this Wednesday, the WhatsApp group erupted.

The morning started with Ram-Ram messages and people posting celebratory variants of Ram imagery on the group. Then a Modi supporter posted a “Nation with Namo” pamphlet, listing “decades-long pending issues” the Modi government had “resolved” in “just six years”. Prominent among those it listed: the centuries old Ram temple dispute.  To which my liberal friend answered, “you must add on the list highest unemployment in 45 years, highest territory ceded to China in 60 years, highest diesel prices.”

It was the kind of argument that was almost a daily ritual on this group. But that day, as the Ayodhya puja began, some of the political neutrals jumped in. “Bhai let it be today,” one counselled the liberal. “Today is a historic day.” On TV, as Modi did a dandwat pranam before the idol of Ram Lalla, another school friend weighed in about “Libtard Sikular Hindus who grew up hating their culture, history, roots and their identity.”

Now, this WhatsApp group with its 100-odd members, was not a scientific sample. But it was a microcosm of the wider social debate in middle India that Modi’s fronting of the Ram temple construction had unleashed. The carefully choreographed imagery of the Vedic yagya in Ayodhya subliminally posited him as a new Hindu suratrana. As we watched them, celebratory Jai Sri Ram messages started pouring in on Whatsapp.

The group admin moved in swiftly, unceremoniously removing the lonely liberal from the group, as well as the vociferous bhakts. “Enough is enough,” said the admin. “It’s a good day today”. It was a revealing epitaph for a day which ended with most of my neighbours lighting lamps outside their house, like it was Diwali.

Modi’s yagya at Ayodhya was in direct contrast to how Nehru had firmly opposed a role for the state in reconstructing the Somnath temple in 1951. His intense debates with his minister KM Munshi, who spearheaded that initiative, and his insistence that Rajendra Prasad, India’s first President, attended the Somnath ceremony only in his personal capacity and not as the president of the Republic, set a template for the independent republic’s initial attitude to religiosity. Yet, Nehru’s opposition to government rebuilding temples was framed in a state that at least constitutionally was not yet ‘secular’. The words ‘secular’ and ‘socialist’ were only added to the Preamble of the Indian Constitution by the 42nd Amendment by Indira Gandhi in 1976 during the Emergency.

Modi’s decision to lead the Ram temple was wrongly decried by many liberals as an abandonment of the Constitution. Yet, as UP chief minister Yogi Adityanath pointed out in his speech at the consecration ceremony, the construction was “within the legal framework, within the democratic and constitutional system and done peacefully.” As the leader of a political party that explicitly listed the construction of the Ram temple in its election manifesto, Modi was well within his rights to front such a construction, once the Supreme Court ruled for a temple and asked for its construction by a government appointed Trust.

The fact is that BJP has won the culture war on Ram. Priyanka Gandhi’s sudden messaging welcoming Ram Lalla, Manish Tiwari’s social media recitation of a Ram bhajan, Kamal Nath changing his Twitter profile picture to that of a Hindu pilgrim reciting the Hanuman Chalisa – all reflect the tricky position the Congress found itself in on the temple. It chose to side with the Ram temple but will gain nothing from it politically as the BJP’s B-team on Hinduness.

Modi, meanwhile, is seeking to appropriate Ram within the reframing of a new ‘Ram Rajya’. One big critique of the Ram temple movement was that it reduced Ram, a multifaceted god, to only an angry Ram. Modi addressed this head on in Ayodhya, making it a point to speak at length on the many sides of Ram and the multiplicity of the Ramayan in its hundreds of regional versions – both Indian and non-Indian.

Tellingly, he sought to harness the story of Ram to the subterranean shift he had spearheaded within his new BJP itself. Ram’s appeal was built on the support of those on the margins, he argued: “vanars and vanvasis”, “the poor” and “women”. So was the promise of this new Ram Rajya that was now held up, similarly focussed on the lower castes, “backwards” and the poor. In a subtle nod to the BJP’s wooing of smaller OBC castes like Rajbhars, Modi went so far as to explicitly mention the 11th century king Suhel Dev, revered by both OBC Rajbhars and Dalit Pasis.

There was no explicit mention of Muslims – though the PM did emphasise repeatedly that “Ram is for all and Ram is in all”. It was classical Modi-speak but the focus on the many Ramayans was certainly atypical of the Janmabhoomi movement’s usual rhetoric. Significantly, Modi repeatedly exhorted the audience to chant the name of Ram but used the traditionally religious slogan ‘Jai Siya Ram’ (which places Sita before Ram) and not ‘Jai Shri Ram’, the aggressive slogan of the Ram Janmabhoomi movement. It signals a shift in registers.

The BJP has positioned itself as the party of Ram but it is also time now to refocus on the economy and revival of jobs the country badly needs. Because that cannot remain ‘Ram bharose’.