HomeSports‘Ringmaster’ Greg asked me to help... 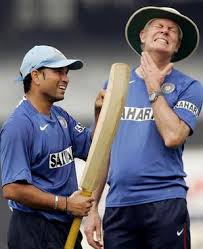 Across 24 years and dozens of landmarks, it was always the God of cricket’s bat that spoke, not the man himself. But that’s set to change.

In his autobiography, ‘Playing It My Way’, co-written with sport historian Boria Majumdar, Sachin Tendulkar has likened former coach Greg Chappell to a ringmaster and sensationally revealed that Chappell sought Sachin’s help in getting Rahul Dravid sacked as captain just a few months before the 2007 World Cup.

“Chappell had come to see me at home and, to my dismay, suggested that I should take over the captaincy from Rahul. Anjali (Sachin’s wife) who was sitting with me was equally shocked to hear him say that ‘together, we could control Indian cricket for years’. I was surprised to hear the coach not showing the slightest amount of respect for the captain, with cricket’s biggest tournament just months away,” writes Sachin.

“I suggested to the BCCI that the best option would be to keep Greg back in India and not send him with the team to the World Cup…That’s not what happened, of course, and the 2007 campaign ended in disaster.” India crashed out of the tournament in the first round.

“Unlike John Wright and Gary Kirsten, Greg (Chappell) was like a ringmaster who imposed his ideas on us,” says Sachin Tendulkar in his forthcoming autobiography, ‘Playing It My Way’.

India’s humiliating exit in the very first round of the World Cup led to Chappell’s tumultuous reign finally coming to an end. Tendulkar was glad to see his back, concluding that “Indian cricket benefitted significantly when the BCCI decided to end Chappell’s tenure in April 2007.” He adds that “several of our senior players were relieved to see him go, which was hardly surprising because he had not treated them well.”

The statement confirms how unhappy India’s senior most players were with the methods of the Australian batting legend who had previously only coached South Australia with little distinction.

For Sachin, Chappell failed to win respect in the dressing room. As he put it, “every time India won, Greg would be seen leading the team, but every time India lost, he would thrust the senior players in front.”

Sourav Ganguly, who lost his captaincy under Chappell, said on television that he “feels vindicated” by these revelations and that he is glad Sachin has spoken out. Dravid said, “I don’t have a comment to make, because it’s a private conversation between two people, and I am not privy to it.”

There are other bombshells too, reportedly on the Monkeygate controversy Down Under when India threatened to leave the tour mid-way and on the controversial declaration by Rahul Dravid at the 2004 Multan Test when Sachin was left stranded on 194 not out. Boria Majumdar, who has co-authored the book, which is to be launched on November 6, says, “You will have to read the book to find out but I can tell you that the master blaster has been totally honest, just the way he did his batting.”

If there was an unflattering record in Sachin’s career it was his tenure as captain, wining 4 and losing 9 of the 25 Tests he led India in. He recounts his frustration at that low in his career, saying, “I hated losing and as captain of the team I felt responsible for the string of miserable performances. More worryingly, I did not know how I could turn it around, as I was already trying my absolute best.”

On March 30, 1997, on the night before his team was bundled out by Brian Lara’s West Indians for a miserable 81, chasing 119 for victory in Barbados, Sachin had been so confident that he had even asked a restaurant waiter to keep a bottle of champagne chilled for the victory celebrations. But India’s batting collapsed and Sachin was so devastated that he even contemplated quitting.

He shut himself up in his room for “two days” and though his wife Anjali helped him out of the crisis he says he still feels the “pangs of that defeat”. 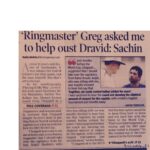