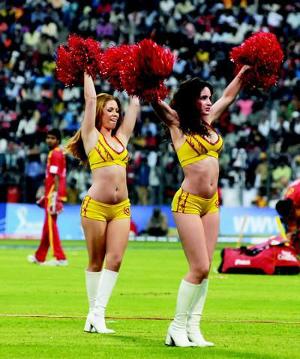 India’s cricketing czars were still digesting the Supreme Court’s definitive judgment on the IPL betting and match-fixing scandal this week, when soccer fans around the world were jolted by news that three major FIFA sponsors — Castrol, Continental, Johnson & Johnson — were joining Sony and Emirates in severing ties with world soccer’s governing body after a year of scandal. Corruption allegations against FIFA in awarding the 2022 World Cup to Qatar and sponsor unhappiness with the management style of FIFA boss Sep Blatter are very different from IPL’s problems but the fallout in Europe reflects how high the stakes can be when apex sporting bodies get engulfed by scandal.

Valued at $3.2 billion, IPL is not only India’s mostwatched sports league but also serious business. With just under three months to go for IPL 8, with uncertainty over the ownership of Chennai Super Kings and Rajasthan Royals, the question is if Brand IPL has taken a hit after the apex court’s verdict?

While 123 players are already signed up for IPL 8 which will be held this year just after the World Cup, from April 8-May 24, this year’s player-auction is still due. An estimated Rs 1,000 crore of advertising is riding on the tournament itself (see charts) and with so much at stake, marketers and industry veterans are divided. Reflecting on the fallout of the judgment on Brand IPL, Santosh Desai, MD and CEO, Future Brands, says, “Continued drama and uncertainty will have an impact because this is a business venture. Doubt and uncertainty are the biggest enemies of stability.”

Prasoon Joshi, chairman Asia Pacific and CEO, McCann WorldGroup India, was more optimistic, arguing that the impact would only be in the short term. “Too many people’s livelihoods now depend on it, they will fight to keep it afloat and it will come out better”. But while people “will not lose hope in the brand,” he says, “you may not see the same kind of over-exuberance of the past either”.

IPL chairman Ranjib Biswal batted away questions insisting that “the brand will not lose”. “The format is good and growing,” he says. “In fact, issues around IPL are now clearer now that the judgment has come.” With the SCappointed three-member committee given six months to work out the punishment for those found guilty of betting, what about the eventual possibility of new teams or new owners? Biswal says it all depends on the committee. “We can have new teams. Absolutely, no problem. If they give out a punishment to bar them or something then we will have to look for an option. The committee will take a call and we will act accordingly.”

IPL this year is also competing with the World Cup which starts on February 14. Industry insiders estimate over Rs 2,000 crore of advertising will ride on both events. The question is which one advertisers will bet more on and whether offfield controversies will dampen advertiser sentiment.

Rohit Gupta, president, Multi-Screen Media, which owns Sony, the network which will broadcast IPL, insists that IPL, with its T20 format, remains a stable and viable platform for advertisers. First, TV ratings over the past year show that largely young Indian TV audiences increasingly have less time to see eight-hour long ODIs and, relatively speaking, seem to prefer T20 games (see charts). Second, World Cup games in Australia and New Zealand will be telecast in Indian in the mornings because of the time-difference and not on prime-time. Third, only 9-10 games in the 49-match tournament will feature India even if it goes all the way.

Advertisers don’t like the “risk-element”, Gupta says, and “IPL is risk-free”. It is a sentiment echoed by Desai, who adds: “Given the fickle nature of the World Cup it will take a brave advertiser to bet on the Indian team this time”.

IPL, in that sense, still retains a unique and stable position as a television bearer of commercial messages. This is why, in 2014, for example, IPL despite coinciding with an epochal general election, its ratings increased by 5%.

Yet, no one can doubt that the World Cup is huge, and Biswal concedes that “some impact will be there.” “We will do something innovative,” he says “to bring in more crowds, something bigger and grander.”

As corporate India makes its calculations, many players are worried. An industry leader says, for many players “80% of their income comes from IPL.” Many remain edgy because a lot of pre-IPL activity which normally starts by this time of the year was stalled until now pending the SC verdict. IPL has gone through this kind of uncertainty before when Lalit Modi was turfed out. Latika Khaneja, director, Collage Sports Management, says when the Modi affair happened, “it affected Brand IPL and they had to rebuild it. They’ll have to do it again.” This is IPL’s “mid-life crisis” as one franchise head puts it. How it handles it will redefine not only the future of India’s cricket, but also its television and the consumer economy.